This Bill Won’t Help Coal Communities, but Rolling Back Regulations Will 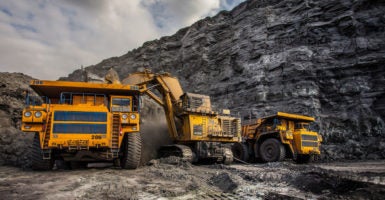 Congress is getting ready to load up a “Christmas tree bill” through a massive omnibus spending package.

One potential ornament for the tree is legislation with the appealing name of the RECLAIM Act, which stands for a real mouthful: the Revitalizing the Economy of Coal Communities by Leveraging Local Activities and Investing More Act.

As positive as the RECLAIM Act sounds, it would be a billion-dollar boondoggle. It would allocate coal tax funds away from their intended purpose of remediating abandoned mine lands and reducing risks to public health and safety. It also would exacerbate well-known problems with federally funded efforts to stimulate certain regions of the economy.

A federal program called Abandoned Mine Land Reclamation imposes a tax on current coal-mining operations in the United States to pay for the environmental cleanup of abandoned mine sites across the country. The program remediates sites mined prior to 1977, before any law stipulated how mines should be reclaimed.

In 1977, Congress created the program through a law called the Surface Mining Control and Reclamation Act, which also established that companies must post bonds to reclaim current sites.

The RECLAIM Act would authorize the secretary of the Interior Department to devote an additional $200 million per year beyond regular distributions to “economic revitalization” reclamation projects for economically distressed coal-mining communities.

What’s Wrong With It

The legislation is problematic for some big reasons. Such activities are clearly beyond the original and necessary purpose of the Abandoned Mine Land Reclamation program.

Allocating money not to improving public health and safety but to politically preferred projects would duplicate existing federal and state efforts and continue to prop up flawed federal attempts to revitalize certain communities.

By attaching economic revitalization and community development to mine reclamation sites, the legislation would prioritize politically enticing projects over ones that would reduce environmental and public health risks.

Although the proposed law technically would fund reclamation projects, the Office of Surface Mining Reclamation and Enforcement would be able to allocate funds that stretch far beyond the bounds of reclamation. Passage of the bill would exacerbate the problem of the office’s distributing funds to low-priority sites.

In fact, the federal government already has implemented a pilot program with similar goals to the RECLAIM Act, and the results were as you would expect. The government dished out tens of millions of taxpayer dollars for things such as job training programs.

The government said one project, a $1.9 million water supply line for a campground, would create 10 to 15 jobs and “increase economic development through adventure tourism.” That equates to $127,000 to $190,000 of taxpayer dollars per job created.

Other projects include an “outdoor adventure ground” with an archery center and a horse barn, and infrastructure for a plant that produces wood pellets to sell as biomass fuel.

These spending activities are far beyond the abandoned mine program’s intended purpose. If it becomes law, the RECLAIM Act would increase funding for politically preferred projects rather than addressing more pressing, environmentally at-risk areas.

The Appalachian Regional Commission spent $152.3 million of taxpayers’ money in fiscal year 2017 across the 13 Appalachian states. To help coal communities adversely affected by an onslaught of federal regulations targeting coal, Congress and the Obama administration in 2015 launched the Partnerships for Opportunity and Workforce and Economic Revitalization Initiative, known as the POWER Initiative.

The initiative, the government says, “supports efforts to create a more vibrant economic future for coal-impacted communities by cultivating economic diversity, enhancing job training and re-employment opportunities, creating jobs in existing or new industries, and attracting new sources of investment.” Since its inception, the program has spent $94 million across 250 counties.

The existence of federally funded economic revitalization efforts does not mean such activities are a good use of taxpayers’ money, or a legitimate function of the federal government. Anecdotally and systemically, federal job training programs have had dismal rates of success.

In November, Reuters reported on pathetic participation in the Obama administration’s POWER Initiative. In two Pennsylvania counties, sign-ups for retraining programs reached only 15 percent of capacity. Only 20 people signed up for 95 slots in a computer coding class.

The failures of the POWER Initiative are a microcosm of the Appalachian Regional Commission’s long history of systemic failure.

Despite spending tens of billions of dollars since the 1960s on infrastructure, health care, education, and other “investment” assistance in the Appalachian region, the commission has largely failed to achieve its goals.

Abigail Hall, an economist at George Mason University, attributes the Appalachian Regional Commission’s failures to its “inability to engage in rational economic calculation” and the perverse incentives created by the program.

As Hall explains, because the commission isn’t a private actor driven by profits and losses but rather a central planner, it cannot effectively determine what to build, where to build it, and why it should be built in the first place.

The program also creates perverse incentives for the commission’s bureaucracy, politicians who stand to benefit from its grants, and the consumers of those grants. The commission has an incentive to grow in size, both in budget and personnel, rather than maximize the program’s efficacy.

Politicians have an incentive to secure grants for projects that have greater political rates of return than economic ones.

Analysis of more than 20,000 Appalachian Regional Commission projects from 1966 through 1998 found that out of the five counties that received the most funding, none ever was “distressed,” which is defined as ranking in the bottom 10 percent of counties across the nation.

Regions that receive the commission’s grants also remain impoverished because the relationship establishes dependency on aid. In many instances, business ventures incurred losses or went under after the funding ceased.

Congress should not divert coal taxes meant for environmental cleanup for similar purposes.

Getting Out of the Way

If policymakers want to enact reform to help coal communities, they should eliminate the plethora of federal regulations that significantly increase the costs of mining coal, building new plants, and operating existing plants.

Many of these regulations are devoid of any meaningful environmental benefits and duplicate state efforts to protect air and water quality. State regulators have the incentive to balance economic and environmental well-being and can use local knowledge to manage the interests of all affected parties.

If market factors result in a transition from coal toward more economical sources of energy, the economy will stand to benefit. More cost-effective electricity, whether derived from natural gas, nuclear power, or solar power, will save families money and lower the cost of doing business.

Cheap natural gas may not make coal a viable option in the near term, but eliminating onerous regulations will allow the market to determine the future of coal in America. The federal government should not get in the way with burdensome regulations.

Despite proponents who try to market the RECLAIM Act as an economic and environmental revitalization, diverting funds intended for abandoned mine land from high-priority public health and safety sites only will exacerbate the issues that plague the program.