The Other Half of the Jacob Blake Conversation 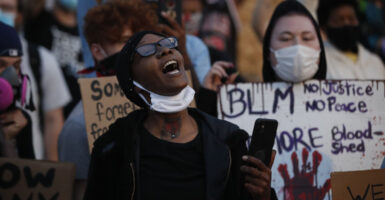 Some, of course, will continue refusing to see high-risk scenarios from a police officer’s point of view. Pictured: Demonstrators march Aug. 25 outside the Kenosha County Courthouse against the police shooting two days earlier of Jacob Blake in Kenosha, Wisconsin.(Photo: Kamil Krzacz ynski/AFP via Getty Images)

It’s time to talk about Jacob Blake and policing reform.

No, I mean the other half of that conversation. The part where we ask what Blake did wrong and why it matters.

We cannot have meaningful policing reform if we pretend that law enforcement officers do not see our actions as civilians from a very different point of view, or if we refuse to analyze how what we do significantly and reasonably affects the responses of police officers.

I don’t know what Officer Rusten Sheskey saw or thought he saw in the moments before he shot Blake seven times Aug. 23 as Blake reached into a door of his sport utility vehicle in Kenosha, Wisconsin. I don’t know that there’s enough public evidence to conclude that Sheskey did absolutely nothing wrong.

But I know what images flashed before my own eyes the first time I watched the now-viral video of an irate Blake, 29, accused of serious crimes and obviously not keen on being arrested, storming toward his vehicle despite the clear commands of a police officer with a drawn gun.

I saw a man named Daniel Clary turn a routine traffic stop into a nightmare for two Pennsylvania state troopers by reaching into his driver’s side window for the gun with which he would shoot and nearly kill them both, about 20 miles north of Bethlehem.

I saw Deyon Rivas-Maestas attack Sheriff’s Deputy Bradley Proulx with a rifle the second he rounded the back of Rivas-Maestas’ car in Douglas County, Colorado.

I saw Mario Hobson, just 45 minutes away from Kenosha in Milwaukee, so desperate to avoid going to jail on warrants for felony domestic violence that he opens fire on officers from a car holding innocent women and children.

I saw Andrew Brannan execute Deputy Kyle Dinkheller with a firearm he grabbed from his truck while being ticketed for speeding in Laurens County, Georgia. Worse, I heard the deputy’s heartbreaking screams in the moments before Brannan put a bullet in his head.

It isn’t hyperbolic to assert that, even before Blake physically fought with the Kenosha police officers, they had every reason to be on heightened alert when showing up to this domestic disturbance: It involved a man with warrants for his arrest, including for felony sexual assault.

As in Kenosha, deputies in Lincoln County arrived to a domestic disturbance where the subject of the call had several outstanding felony warrants.

Some, of course, will continue refusing to see high-risk scenarios from an officer’s point of view.

They will continue seeing “harmless noncompliance,” and not Malcolm Orr as he shoots Officer Quincy Smith at point-blank range in Estill, South Carolina, with the same hand he refused to take out of his pocket.

They will continue seeing “just a knife,” instead of an Athens, Georgia, police officer who nearly has his throat slit by a man who  already had been shot multiple times.

They will continue seeing someone with his “back turned to officers” as posing no danger whatsoever, while remaining willfully blind to the reality of just how quickly someone can grab a weapon and attack officers.

I suppose that’s their prerogative. It’s not the first time—and almost certainly won’t be the last time—that a national conversation is driven by one-sided monologues.

But please, stop asking me to pretend this is a one-sided conversation where we can’t acknowledge and appreciate the reasonable fears of officers who find themselves in extremely dangerous situations because of the actions of noncompliant individuals.

Stop asking me to treat every police shooting victim as Breonna Taylor sleeping innocently in her bed, having done nothing to create or exacerbate the risk of violent confrontations.

Stop asking me to suspend rationality and engage in this discussion as though officers have no legitimate reason to be on heightened alert, even in many cases where their final actions are questionable.

And please, stop asking me to ignore the role that Jacob Blake’s actions played in his own shooting. Stop asking me to believe that violating a restraining order, physically assaulting officers, brushing aside a Taser, and ignoring the commands of officers who have their guns drawn did not substantially create the situation in which he now finds himself.

Those actions are the other half of the policing conversation. And we need to talk about them.