Despite Being Closed, San Diego Schools Descend Into Wokeness 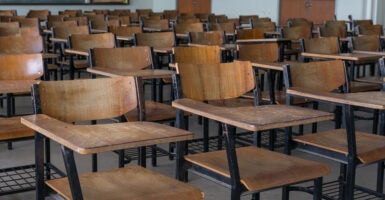 Schools around the country, including in San Diego, have been shut down due to the COVID-19 pandemic, but efforts to push social justice and critical theory among teachers, and thereby to students, continue unabated. (Photo: Sengchoy Inthachack/EyeEm/Getty Images)

Your local school might currently be shut down, but the “great awokening” will continue, pandemic or not—and whether you like it or not.

The training begins with a ‘land acknowledgement,’ in which the teachers are asked to accept that they are colonizers living on stolen Native American land. Then they are told they will experience ‘guilt, anger, apathy, [and] closed-mindedness’ because of their ‘white fragility.’

After watching clips of [self-styled ‘anti-racist activists’] Robin DiAngelo and Ibram Kendi, the trainers tell the teachers: ‘you are racist,’ ‘you are upholding racist ideas, structures, and policies,’ and that they must commit to becoming ‘anti-racist’ in the classroom. They must submit to the new racial orthodoxy.

I’ve outlined previously the beliefs of DiAngelo and Kendi, who have become media darlings and whose works have become trendy in the wake of the protests of the death of George Floyd.

In short, Kendi and DiAngelo preach an ideology that isn’t aimed simply at reducing racism—which most Americans want—but instead redefines what racism is.

According to their theories, you are inherently defined by your race; racial discrimination is a good thing if it benefits groups they define as “historically oppressed”; and all who oppose them will be categorized as “racists” for not going along with even their most ruthlessly tyrannical plans.

That brings us back to the San Diego Unified School District, which appears to be all aboard.

“Teachers are told they must become ‘anti-racist’ activists,” Rufo wrote. “They must ‘confront and examine [their] white privilege,’ ‘acknowledge when [they] feel white fragility,’ and ‘teach others to see their privilege.’ They must turn their schools into activist organizations.”

San Diego Unified School District Superintendent Cindy Marten responded to Rufo’s report, saying that the “successful professional development session” was voluntary and that the “racial healing handbook” used for the training was from a “respected academic.”

Regardless of whether the session was mandatory this time or not, it fits a general pattern in the district. It made news in early November when it adopted a new grading system that would remove behavioral issues, such as turning in late assignments and showing up late to class, as factors in grading.

It did that because there are disparities between the number of white and minority students who receive “D” and “F” grades. For purveyors of increasing “equity,” statistical discrepancies between groups of people can be ascribed only to systemic racism and other issues pertaining to critical theory.

That was apparently only one small step in what San Diego Unified School Board Vice President Richard Barrera said was a process to make the school district “anti-racist.”

So, even while the schools are shut down, work continues to make them “anti-racist” indoctrination centers.

The transformation of a single school district wouldn’t necessarily be deeply concerning other than to the parents of children attending those schools, except that it fits a broader, troubling pattern.

Indoctrination, misinformation, and misleading books, like the late Howard Zinn’s “A People’s History of the United States,” have found their way into schools for a generation or more.

Even the use of misleading and factually challenged material, such as The New York Times’ so-called 1619 Project, in some schools would not be of the gravest concern in isolation.

What’s new is that the revolution appears to be becoming systematized.

For example, what’s the opposite of an “anti-racist”? A racist, according to the peddlers of this new creed. If you don’t go along with the plan, you will be labeled an enemy of social justice or of the anti-racist movement.

Woke curriculum and anti-racist training sessions are now becoming the norm at many public schools around the United States. It’s often foisted on teachers and faculty by a swelling class of administrators who eat up school budgets and purvey the most radical ideas of “respected” academics.

That’s the process that presents the gravest threat to our future. And it’s why many Americans are becoming concerned about the rise of socialism.

That’s because the threat of socialism is not just about higher taxes and bigger government, as bad as those things are. It’s about the greater threat to liberty and to the sacred rights at the heart of our founding that have been a rebuke to tyrants in our age and every age.

Socialism and other hard-left theories may crumble in the face of reality, but they can be propped up and sustained by the government and powerful institutions with their grip on the levers of power.

What will happen when “equity” isn’t achieved, and new discipline systems and training sessions don’t have any tangible effect?

Will the pedagogues of equity, inclusion, and anti-racism find that the problem is not with systemic racism, but instead with their understanding of human nature?

And as we’ve seen through this turbulent year of coronavirus pandemic, the “party of science” will put aside the science for the interest of the party and its prevailing ideology.

The transformation of our schools into laboratories of indoctrination should concern everyone, whether you have children who attend those schools or not.

The first step to counter it is drawing the radicalism out into the light of day. The next step is to take action and use the tools that we have, like school choice, to put pressure on the institutions that have failed us.