How Rapid-Result, at-Home Tests for COVID-19 Could Slash Infection Rate 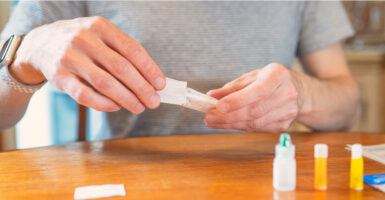 “Doing the same thing over and over again is going to produce the same results, so we have to try something new,” The Heritage Foundation’s Doug Badger says of the need to manufacture rapid-result COVID-19 tests for home use. (Photo: Christopher Hopefitch/Getty Images)

Imagine a tool that could significantly decrease the spread of COVID-19 in a month, and maybe stop the coronavirus altogether in less than a year.

This tool would be significantly cheaper than imposing lockdowns and other restrictions, and provide an avenue for schools and businesses to reopen.

Imagine no further, because experts say that tool already exists and just needs to be produced.

Rapid COVID-19 tests for at-home use could be one of the most effective ways to prevent the spread of the virus that causes COVID-19, advocates say.

Self-tests for COVID-19 that can be done at home are “a way to give people tools to know if they are infectious so that they can make the right decisions on a daily basis,” Dr. Michael Mina, an assistant professor of epidemiology and immunology at Harvard University’s T.H. Chan School of Public Health, said Thursday during a Heritage Foundation panel event titled “Rapid COVID Tests: A Cure for Lockdowns, a Complement to Vaccines.”

“These tests can exist today. We just have failed to produce them and put them into the hands [of Americans],” said Mina, who has done extensive research on the patterns and immunological consequences of diseases.

Also speaking during the virtual event were Paul Romer, who won the Nobel Prize in economic sciences, and Doug Badger, a visiting fellow at Heritage who served as an adviser to President George W. Bush on health-related matters.

To manufacture enough self-administered tests for Americans to check their status regularly for six or seven months would cost about $10 billion, Mina estimated. But what is needed right now, he said, is for Congress to include “specifically $1 billion in this next [COVID-19] relief bill” to cover manufacturing.

Although $1 billion may sound like a lot of money, it is only “one five-thousandth of what we have spent already on this virus, or what it has cost us,” he said.

If only half the nation’s population uses the tests and self-quarantines if positive, “we will go from exponential growth, where we are right now in the outbreak, to exponential decline,” Mina projected. “And so … instead of going from 100 people to 400 people [infected] within a month, we would go from 100 people to 20.”

Ideally, Americans would use the small, paper-strip tests twice a week, the Harvard professor and medical doctor said. To achieve this, the nation would have to manufacture between 10 million to 30 million tests a day.

Although Mina said he embraces all forms of testing for COVID-19, the speed at which an individual can know his own results is one of the most important factors when considering a test’s ability to mitigate viral spread.

A test that won’t provide results for three days “is a useless test,” he said.

Many in the medical community have opposed the home tests because they are not 100% accurate, he said. Opponents also warn that some will use a negative result as a pass to go out and party or ignore all COVID-19 precautions.

“A key thing holding back these tests is [the] Food and Drug Administration,” Marie Fishpaw, director of domestic policy studies at The Heritage Foundation, said in an email. The FDA “won’t approve the tests because they let Americans get results without necessarily telling public health officials.”

Mina argued, however, that Americans should not be kept from knowing their own health information.

And if individuals aren’t infectious, “it doesn’t really matter what they do,” said Romer, a co-recipient of the 2018 Nobel Prize in economic sciences and an economics professor at New York University. “But the evidence on college campuses actually shows that the net effect of testing is to make everybody more conservative.”

One way to incentivize individuals to self-quarantine if they get a positive test result would be to have them “qualify for wage replacement” from the government until they test negative, Romer suggested.

The home tests would not replace a vaccine or other precautions such as masks and social distancing, but should be seen as a “very powerful adjunct to everything else that people are already doing,” Mina said.

And, as Romer pointed out, it likely will take months for vaccines to be readily available to all Americans, and for some Americans to trust them. In the meantime, rapid-response home tests will decrease the spread.

With the Centers for Disease Control and Prevention reporting a record high of 231,396 new COVID-19 cases Wednesday, The Heritage Foundation’s Badger put much of the onus on political leaders to take action and depart from a “losing strategy.”

Former Vice President Joe Biden recently predicted that another 250,000 Americans could die before January “because people aren’t paying attention,” Badger said, adding that politicians have to take responsibility and be open to other options:

So we are on sort of a failed policy course on the one side, and on the other side, we are beginning to tell people, ‘Well, it’s your fault this is happening.’ So we are really at a juncture where it is absolutely essential that we change strategies. And I think the first part of that is really necessary for political leaders, as well as public health officials, to begin to acknowledge, ‘OK, guys, this is not working. Are there alternatives?’ And until we begin to open that mindset, it’s going to be very difficult to get people to change course.

Once political leaders recognize the need for a course correction, Badger said, they should stop thinking so much about the money needed to mitigate the damage from COVID-19 policies that failed and put those resources toward a winning strategy.

Dr. Anthony Fauci, director of the National Institute of Allergy and Infectious Diseases, recently has been vocal about the need for more widespread and regular testing, Badger said, but ultimately it is the job of Congress, other political leaders, and medical regulators to produce rapid-response, at-home tests.

“Doing the same thing over and over again is going to produce the same results, so we have to try something new,” Badger said.

This piece was updated after initial publication to include a quote from Marie Fishpaw, director of domestic policy studies at The Heritage Foundation.