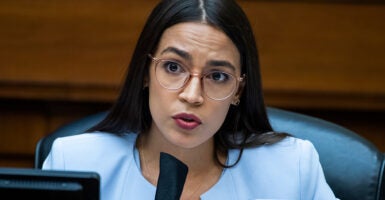 Turns out, Rep. Alexandria Ocasio-Cortez, D-N.Y., does a better job selling Goya than her radical agenda. According to the company’s CEO, her boycott of the brand was the gift no one saw coming.

When the House socialist vowed to stop buying Goya because CEO Robert Unanue visited the Trump White House, he said his sales increased 1,000%. It was such a boon to business, Unanue chuckled, that the company gave her an honorary “Employee of the Month” award. Take that, cancel culture!

Of course, now that the joke is on her, Ocasio-Cortez is trying to claim that she never led a boycott in the first place. Either way, her influence obviously isn’t as big as Democrats want to think is.

As for Unanue, despite all of the media’s hounding, he’s never apologized for the work he did with the president or backed away from the positive comments he made about President Donald Trump.

He had partnered with former President Barack Obama, he told reporters at the time, and never heard an unkind word. He had no intentions of letting anyone get under his skin for doing the same thing with his successor.

“You’re allowed to talk good or talk praise to one president but … you make a positive comment, all the sudden that’s not acceptable,” Unanue shook his head. “If you’re called by the president of the United States, you’re going to say, ‘No, I’m sorry, I’m busy, no thank you’? I didn’t say that to the Obamas, and I didn’t say that to President Trump.”

The real winner of this standoff, though, isn’t just Goya Foods—it’s the American consumer. While Big Business is on its liberal high horse, embracing all kinds of social radicalism, the people of this country are sending a powerful message: their politics don’t sell. And if companies are foolish enough to keep pushing this extremism, shoppers will push back.

As loud as it seems with its gang of Hollywood, Big Tech, the press, and Fortune 500, the far-left is no match for millions of everyday Americans with conviction.

So if you think how you spend your money doesn’t matter, let this story assure you: it does. One can of this or that may not seem like much, but together, it can make a strong statement.

I encourage you, especially now in the gift-buying season, to know where your money is going. Is it funding Planned Parenthood? Abortion? Slave labor in China? Transgender activism? The radical Southern Poverty Law Center? Black Lives Matter Marxists?

Vote with your dollars. Support the CEOs who are standing up to the cancel culture when you can—and find alternatives to the ones who are using your money against you. If you want to be heard by the people trashing your values, it’s simple: Let your money do the talking.

Visit our friends at 2nd Vote to see how.