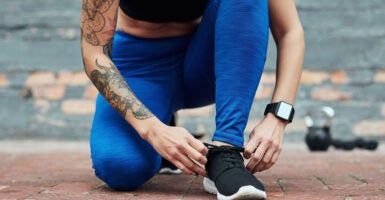 Tanner Aliff is a Portland-based Young Voices contributor and a research fellow studying the effects of the COVID-19 pandemic.

Cancel culture is a black hole that is swallowing corporate America. The zeitgeist of social awareness and virtue signaling has spread far beyond the realm of adolescent Instagram posts to the point where corporate titans now have joined in the effort to push woke capitalism.

Don’t be fooled. Principles are hardly the reason companies are altering their marketing faces to appeal to progressive America.

To be fair, some nonprofits make decisions based on their devotion to supporting just causes. But for larger nationwide corporations, appealing to social justice movements has little to do with idealism.

For example, Lululemon, a publicly traded women’s clothing chain that raked in $489.5 million in net direct-to-consumer revenue during a pandemic, recently had a brand ambassador hold a series of workshops titled “Unveiling Historical Erasure and Resisting Capitalism.”

Despite pandemic-induced financial hardship, Lululemon CEO Calvin McDonald has apparently stood by past claims saying there is no reason for the brand to reduce the price of women’s tights that run over $100.

If Lululemon truly rejected the capitalist model, it would have delisted from the stock market and become a worker’s co-op. But it won’t, because Lululemon has no intention of embodying the woke visage it fronts. Anti-capitalism is simply its newest marketing strategy to collect more revenue.

The stunt justly backfired. Many news outlets and social media commentators exposed the company’s hypocrisy. After a few days, the company separated itself from the brand ambassador and issued several apologies—a cheap concession to critics, but evidence that not even a company worth $45 billion is insulated from the growing power of cancel culture.

Most companies can’t afford to be in the crosshairs of woke culture and end up desperately appealing to critics to survive.

One company that buckled under cancel culture pressure was grunge retailer Dolls Kill. After one of its stores was looted in the May riots, business founder Shoddy Lynn asked the police to gather in front of another store location in Los Angeles. Once police took position in front of the store, Lynn snapped a picture and made an Instagram post admiring the police.

The post immediately received mass backlash from thousands of social commentators and sparked several large clothing brands to terminate their partnerships with Dolls Kill. In an attempt to atone for its sin, the company took down the original Instagram post, issued multiple apologies, and pledged to spend more than $1 million to buy exclusively from black-owned vendors.

But the criticism continued until Dolls Kill began affirming Black Lives Matter, despite having a history of cutting connections with influencers who affirmed the movement. The company did not have a spontaneous desire to rebrand its core values—it converted out of self-preservation.

Whether to get ahead or survive, companies are finding it harder to avoid appealing to woke culture. The hypervigilance and willingness of woke critics to coordinate a consolidated effort against businesses threaten their very existence.

On its surface, the rise of woke capitalism could be considered positive. With increased cohesiveness from consumers, big businesses will get less opportunity to price gouge or furtively ride woke trends without suffering a severe backlash.

But the threat of mob tyranny and vicious attacks against businesses is itself troubling.

Dolls Kill does have a history of offensive apparel that warrants criticism, but many businesses are being unjustly attacked for attempting to remain neutral. Woke capitalism is becoming less of a choice for businesses and more of a black hole no one can escape.

Consumers should hold the businesses they patronize accountable, and certainly have gained new powers and tools for doing so. As individual consumers feel an increased amount of power, they also should feel an increased responsibility to make sure their judgments are fair.