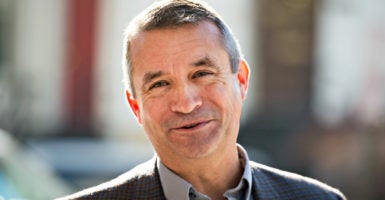 “Congress is supposed to be the people's house, not the politicians’ house,” says Rep. Don Bacon, R-Neb., here talking with reporters outside the Capitol Hill Hotel on Nov. 14, 2016, the day incoming freshman members checked in for orientation. (Photo: Tom Williams/CQ Roll Call/Newscom)

Six months shy of serving 30 years, Brig. Gen. Don Bacon decided to end his Air Force career so he could speak out on the concerning direction he saw the country taking.

A run for Congress, however, was not what Bacon had originally envisioned.

“I decided to retire a little early because I wanted to speak up, as you can’t do that wearing a uniform,” Bacon told The Daily Signal in a phone interview over the holidays. “And I just felt like our country was going in the wrong direction and I wanted to start writing articles and editorials, giving speeches, just getting involved.”

Bacon, R-Neb., is one of 30 Republican freshmen in the House who were set to be sworn in Tuesday as the new Congress convened, 17 days before Donald Trump’s inauguration as president.

Democrats also welcomed 30 freshmen to the House, where Republicans hold a majority of 241-194 after a net loss of six seats in the Nov. 8 election.

Although a new member, Bacon, 53, has some Capitol Hill experience as an adviser on military issues to Rep. Jeff Fortenberry, R-Neb. As an assistant professor at Bellevue University, a medium-sized college in Nebraska, he has taught courses on leadership and American vision and values.

Bacon says his desire to become active in civic life was instilled in him long before his military career.

“My story is I was raised on a farm in Illinois,” Bacon said. “[We grew] corn, soybeans, hay, and I was raised with a family that really liked talking about public policy and so I have always had a burning desire to be involved.”

‘Maybe This Is Why We’re Here’

Bacon says he saw serving his country in the military as a good place to start. “I joined the Air Force at 21 as a newlywed,” he said.

It was 1985 and he had gotten his political science degree from Northern Illinois University the year before.

Bacon went on to serve in 16 assignments in Asia, Europe, the Middle East, and “coast to coast in the United States and a lot of places in the middle,” he said. His duties included electronic warfare, intelligence, and reconnaissance.

During four deployments to the Middle East, he helped establish the Israeli missile defense system. He commanded an electronic warfare squadron during the invasion of Iraq and returned to Baghdad for a yearlong tour during the surge of 2007-2008.

Above all, however, Bacon says, his favorite part of his Air Force service was the opportunity to command at military bases, including at Ramstein Air Base in Rhineland-Palatinate, Germany, and Offutt Air Force Base near Bellevue, Nebraska.

Bacon says he retired from the Air Force in 2014 because he wanted to start getting politically involved and campaign for “down-ballot folks” who he believed to be principled leaders for Nebraska.

He will represent Nebraska’s 2nd Congressional District, which includes Douglas and Sarpy counties in the eastern part of the state.

He decided to run for Congress after Rep. Lee Terry, R-Neb., lost re-election in 2014 to a Democrat state senator, Brad Ashford.

“Our congressman got defeated … by a 30-year local Democrat politician,” Bacon said. “He [Ashford] had 30 years of history in the state. My wife and I looked at each other and said, maybe this is why we’re here and maybe we can make a difference.”

Bacon and his wife, Angie, who works in Omaha as a real estate agent, have three sons and a daughter ranging in age from 20 to 32, plus three granddaughters.

‘We Built a Small Team’

Bacon said Ashford attempted to portray himself as a moderate, but the incumbent Democrat’s record proved otherwise.

Ashford, he said, “voted for Nancy Pelosi twice for speaker and voted with her about 80 percent of the time.”

Considered one of the most liberal Democrats in Congress, Pelosi, D-Calif., is the former House speaker and current Democratic leader.

“You will not have that with Don Bacon in Congress,” he said.

The road to Congress, however, was by no means easy and Bacon says things came together slowly.

One challenge was building his name recognition, which stood at 9 percent in January 2015, he says.

“We started out very slow,” Bacon said. “No one knew who I was, and so we had a couple of the local mayors who knew me from being the base commander. So we just built a small team.”

The hard work paid off, however. In the May 10 primary, Bacon defeated lawyer and former state legislator Chip Maxwell, a tea party favorite, by a 2-to-1 margin, the Omaha World-Herald reported.

In the end, Bacon beat Ashford by a margin of fewer than 5,600 votes Nov. 8, and the incumbent Democrat called the next morning to concede.

He is one of only three Republicans who defeated an incumbent House Democrat, according to OpenSecrets.org.

I think, on paper, it looked like an uphill climb. My opponent [Ashford] had much more money and much more name ID. I think we had a better story to tell.

Bacon described his campaign as centered around four pillars: addressing harmful regulations by federal agencies such as the Environmental Protection Agency and the Department of Labor, reforming the tax code, addressing the national debt of nearly $20 trillion, and strengthening the military.

Bacon said the Obama administration “underestimated ISIS,” the terrorist army that calls itself the Islamic State, and the Trump administration must unite with other countries to defeat ISIS.

“I hope we can be able to work with more of our traditional allies to go after ISIS. I think that’s the one thing we’ve got to do better,” Bacon said.

Bacon said his campaign’s success largely is due to the young people who volunteered:

I had 150 young volunteers on our team from three different universities and 10 different high schools and we knocked on 130,000 doors … and that is probably the reason I won. I am excited that a conservative can pull on a lot of young people.

A foreshadowing of Tuesday! pic.twitter.com/2mVWge52xm

The conviction of young people in Nebraska’s 2nd Congressional District did not go unnoticed.

Hal Daub, a former mayor of Omaha who represented the district from 1981-1989, served as Bacon’s finance chairman. The youth who got involved helped make the campaign a success, he said.

“A core group of about 60 showed up for everything and did a lot of the walking and stuffing and sticking and licking and calling, all the things that you do to make a campaign really work,” Daub told The Daily Signal in a phone interview.

‘Not the Politicians’ House’

Daub said Bacon made such a significant impact because of his personality and interest in young people:

He cared about them and reached out to them, and it was fun to watch the chemistry between this marching army, this brigade, of young people really, really working hard to elect Don. And I think he relates so very well to young people.

“Don brings that energy and Don is very young at heart and able to lead that charge, and I think he is the type of guy that people want to follow,” Lindstrom said.

“I know Don will be a positive, strong leader for the 2nd District,” Fischer said in a statement provided to The Daily Signal. “He will fight to uphold Nebraska values, and his extensive military leadership experience has prepared him to address the many threats our nation faces both abroad and here at home.”

Bacon said his desire is to serve his constituents and build a record based on addressing their concerns.

“We have lots of career politicians in Washington right now, and I don’t think it serves us well,” Bacon said. “Congress is supposed to be the people’s house, not the politicians’ house.”