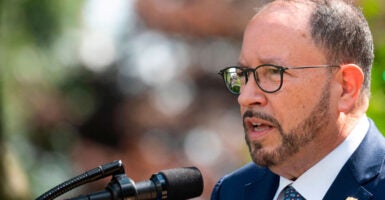 Identity politics dictates that when Goya Foods CEO Bob Unanue refuses feelings of vassalage or servitude and has no grievances, he must be stepped on. Pictured: Unanue speaks Thursday in the Rose Garden before President Donald Trump signs an executive order creating the Hispanic Prosperity Initiative. (Photo: Jim Watson/AFP/Getty Images)

It looks like Bob Unanue, the CEO of Goya Foods Inc., may be the first American corporate leader to stand up to cancel culture and tell the mob he’s not scared. But he has fulfilled an even more important role.

The farcical attempt by liberal politicians and celebrities to boycott Goya products because Unanue visited the White House last week and—shocker—praised its inhabitant shows for the umpteenth time that ethnic identity groups were created as vehicles for the introduction of leftist policies in America. Conservatives beware.

Leftist activists intimidated bureaucrats into officializing these groups because they sought to use them as agents of change, which is why progressives today will attempt to discipline harshly those who stray. A pliant media will play along.

Unanue was among business and community leaders who visited the White House on Thursday on the occasion of President Donald Trump’s signing an executive order creating the White House’s Hispanic Prosperity Initiative.

As a part of this effort, Unanue announced that Goya would “donate one million cans of chickpeas and another million pounds of food to food banks throughout the country,” Spectrum News reported.

All good, right? Unanue showed his appreciation for Trump’s initiative by praising the former real estate developer in this manner:

We’re all truly blessed at the same time to have a leader like President Trump who is a builder. And so we have an incredible builder. And we pray. We pray for our leadership, our president, and we pray for our country, that we will continue to prosper and to grow.

Apparently nobody had heard that House Speaker Nancy Pelosi, too, says that “I pray for the president all the time.” A major ruckus broke out, and yet another boycott was born.

@GoyaFoods has been a staple of so many Latino households for generations. Now their CEO, Bob Unanue, is praising a president who villainizes and maliciously attacks Latinos for political gain. Americans should think twice before buying their products. #Goyaway

Others followed. Lin-Manuel Miranda, creator of the stirringly patriotic musical “Hamilton,” also took to our new virtual Lyceum and wrote: “We learned to bake bread in this pandemic, we can learn to make our own adobo con pimienta. Bye.”

It just so happens that both Castro and Miranda—and Unanue as well—are emblematic of different parts of the identity politics conundrum.

Castro is a Mexican-American and Miranda, according to several stories (including this one), has a multifaceted ethnic background that includes Puerto Ricans, Mexicans, blacks, and people from the British Isles.

Unanue, meanwhile, was born in this country, and all four of his grandparents were Spaniards.

In another age, Miranda might have described himself with the oft-used term “Heinz 57 American.” Castro would describe himself as a Mexican-American and Unanue might have viewed himself as another American of European background.

It’s not at all clear, however, what the “Hispanic” pan-ethnicity means. It doesn’t mean speaking Spanish (Castro doesn’t); it doesn’t mean origins in Latin America (none of Unanue’s grandparents were from there), and it does not mean ethnic cohesion (Miranda appears to be part everything).

Today all three men, however, fall under the pan-ethnicity, a category created in 1977 by the federal Office of Management and Budget at the instance of activists. The idea, as I explain in my forthcoming book, “The Plot to Change America: How Identity Politics Is Dividing the Land of the Free,” was to create a minority group that would be seen as distinct from whites.

Another key element: The leftist activists from La Raza and other groups who intimidated bureaucrats into creating the new category imbued it with the grievances of victimhood. Such “consciousness raising” would transform “the facts of vassalage into the signals of rebellion and social construction,” in the words Italian communist leader Antonio Gramsci wrote in the 1920s.

Herbert Marcuse, a German-American intellectual academic whose influence over the identity politics of today also looms large, put the same thought another way: “All lib­eration depends on the consciousness of servitude.”

But if someone such as Unanue comes along and ignores a social compact to which he was not a signatory, rejects feelings of vassalage or servitude, and bears no resentments, then he must be stepped on.

Even Miranda’s “Hamilton” looks vulnerable to fall prey to identity politics’ cancel culture. Its sin? The fact that it is patriotically stirring.

Identity politics is either cruel or a threat to national cohesion or so absurd as to be farcical. The message for our leaders is that they should go back to what was the ideal in America for centuries: All citizens should be seen as Americans in the eyes of the law, no matter where they or their ancestors came from, and America’s leaders will work for all Americans no matter where they came from.

In the meantime, here’s hoping that Unanue hangs tough. If he begins to show that the agents of cancel culture have no clothes, he could become an American icon.