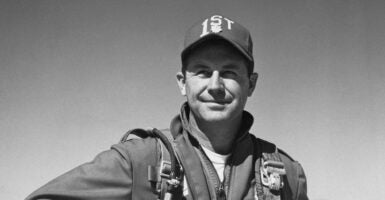 Brig. Gen. Chuck Yeager, an Air Force ace and the first man on earth to fly faster than sound, will be remembered as an American hero. (Photo: Bettmann/Contributor/Getty Images)

Chuck Yeager, the Air Force pilot who became the first man in history to break the sound barrier, made his last takeoff Monday, dying peacefully at age 97.

Yeager’s name is recognized around the world, that of a test pilot who chased the demon of speed—and then exceeded the speed of sound in 1947. But, if you dig a little deeper into his life, you’ll find a whole lot more to honor about this extraordinary man.

As so many Americans did in the days following Pearl Harbor, Yeager enlisted in the Army at 18. By the time he was 21, he was flying combat missions over Europe in a P-51 Mustang.

Yeager scored his first air-to-air victory by shooting down a Messerschmitt Bf 109 fighter during the Allies’ first daytime bombing mission to Berlin on March 4, 1944.

The next day, while flying his eighth mission of the war, he suffered the same fate and was shot down deep in Nazi territory. Miraculously, he evaded capture and, during the next several weeks, escaped over the Pyrenees Mountains to Spain with the help of the French Resistance.

He returned to England and, after a conversation with Gen. Dwight D. Eisenhower himself, received permission to return to the cockpit and to fly bomber escort missions in August.

On Oct. 12, in an extraordinary demonstration of airmanship, he single-handedly shot down five Messerschmitt Bf 109s. On Nov. 27, he downed four more Focke-Wulf Fw 190 fighters.

By the end of the war, Yeager would be credited with destroying more than 11 aircraft in dogfights over Germany and received two Silver Stars, three Distinguished Flying Crosses, and the Purple Heart. And he did all of that before he became a household name.

After the war, Yeager graduated from the Air Force Flight Performance School and was assigned to what is now Edwards Air Force Base as a test pilot. After Bell Aircraft balked at another pilot’s demand for $150,000 to attempt to break the sound barrier, it asked Yeager if he would be willing to make the attempt.

Over the next several years, he would go on to establish several more speed records, the last of which was set Dec. 12, 1953, when he reached Mach 2.44—almost two-and-a-half times the speed of sound.

As he decelerated his Bell X-1A that afternoon, the aircraft began oscillating and went out of control, plummeting—at times tumbling end-over-end—for more than 50,000 feet. Incredibly, he recovered control of the aircraft and returned it to Edwards. He had hands of gold.

By the end of his career, he had logged more than 10,000 hours of flying time; flown some 361 fighter, bomber, and test aircraft; and attained the rank of brigadier general.

Like aviation legends Eddie Rickenbacker, Charles Lindbergh, and Amelia Earhart before him, Chuck Yeager will be remembered by most as a legend in the annals of aviation. But in every sense of the word, he was an American hero.

Here’s a nickel on the grass for one of the greatest pilots of all time. Godspeed, General Yeager.