On 73rd Anniversary, Air Force Flies Higher Than Ever 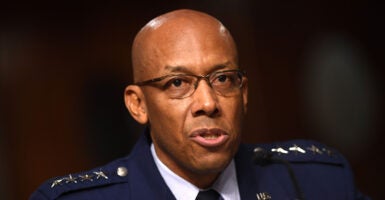 Sept. 18 marks the birthday of the U.S. Air Force and, at the ripe old age of 73, it has enjoyed a journey like few others.

Born out of the Army, the Air Force became a separate service in 1947 with a mission that looked just like the one it executed as the Army Air Corps during World War II.

That organization would change subtly at first, but over time, space’s rise to prominence would bring a host of capabilities that expanded the service’s portfolio and significantly increased its impact on the Joint Force.

During the past three years, revelations about our space capabilities, as well as those of our adversaries, drove independent studies that made this past year one of the most momentous in the service’s history.

Just prior to Christmas, the Air Force gave birth to the fifth uniformed service within the Department of Defense—the U.S. Space Force.

The Air Force moved immediately to shift its portfolio of space assets to the new service, which will affect at least three mission areas: Air and Space Superiority, Intelligence, Surveillance and Reconnaissance, and Command and Control.

Each of those mission sets was born from air-breathing assets, and while the loss of the space portfolio will reduce the service’s inherent capabilities, it will remain within the Department of the Air Force and allow the Air Force to focus the weight of its efforts on the core missions within the air and cyber domains.

Much of the effort of the Air Force headquarters staff has been and will be dedicated to ensuring the foundation of that new service is solid, but the organization as a whole has done extraordinary work executing its wartime and peacetime roles and laying the groundwork for an exceptional future.

While the administration continues to wind down the U.S. presence in Afghanistan, Iraq, and Syria, airmen continue to deploy to the region to execute their combat and combat support roles, and elements of the Air Force will likely be in and around those regions long after the other services depart.

The global COVID-19 pandemic has had little effect on wartime operations, but it did impact the tempo back home.

Training units slowed production as they struck a balance between training in close quarters with the long-term well-being of their personnel. But the other wheels, particularly those with a future focus, continued to pick up speed.

Just this week, the service’s head of acquisition, Will Roper, announced that a sixth-generation fighter prototype had already taken flight and that he was confident that fighter would be combat-ready within the next five years.

That timeline is significant as, if his predictions are correct, it will mark the fastest prototype-to-combat-ready timeline any fighter has enjoyed in the past 50 years.

It also will be the first time any great power has proudly moved to acquire the most modern fighter in the world, while simultaneously initiating the acquisition of a fighter that is a full two generations older with the F-15EX.

The service continues to acquire the KC-46, and word on the street is that the B-21, the next-generation bomber, is within two years of hitting Air Force flight lines.

Adding those combat-ready weapons systems to the portfolio in number will be a huge leg up in this service’s preparation for a fight against a peer adversary.

In August, the Air Force welcomed its 22nd chief of staff with the appointment of Gen. Charles “CQ” Brown, the first African American to hold that position.

His arrival brings no certainty that the next administration will support the service with the kind of funding it has enjoyed over the past four years, nor certainty that global tensions will somehow ease. But with Brown at the wheel, you can bet this service will fly higher, farther, and faster than ever before.