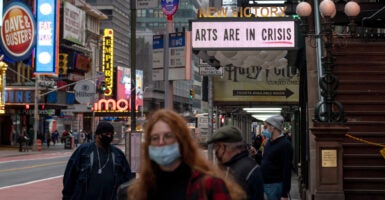 Lauryn Melanson is a junior and history major at Hillsdale College and an intern in the Center for American Studies at The Heritage Foundation’s Feulner Institute.

When COVID-19 lockdowns brought the U.S. economy to an abrupt halt, all eyes turned to a handful of industries that have suffered as a result, such as restaurants, small businesses, and airlines. But few people realize that the entertainment industry is being hit from all sides without a moment of reprieve.

For example, Musical Theatre West, a nonprofit theater company in Long Beach, California, is seeing millions of dollars in losses because of the coronavirus pandemic.

The theater took “a million-dollar loss in the blink of an eye” the day shutdowns were announced in California, according to the theater’s educational outreach coordinator, Dana Leach, in a private interview with me.

The lockdowns have already cost Musical Theatre West and other companies in the entertainment industry greatly in the short term, but with the lockdown expected to continue until the fall of 2021 in California, Leach and others expect long-term costs as well.

Theaters are trying to stay afloat by switching to livestreaming, but are struggling greatly. In order for Musical Theatre West to fulfill its grant requirements of providing educational experiences to student audiences, Leach says, the theater had to figure out how to minimize its expenses purchasing equipment to film their productions.

As a nonprofit, it relies on grants and loans to sustain itself during this industry upheaval, while investing more money to produce and protect its product from being accessed without payment.

Yet revenue from streaming shows is significantly less than sales made with live audiences.

Leach, who is also a producer at the nearby Long Beach Shakespeare Company, says the company made $2,100 in four weeks streaming a show versus $3,000 per week in front of a live audience.

As Leach describes it, theaters are bleeding money on all sides—paying rent, salaries, unemployment, and the added costs of equipment for filming and subscribing to paywalls on their websites to protect their filmed productions.

Live theater doesn’t have the same reach and established streaming services that the film industry had in place before lockdowns. That is not to say that the film industry has not suffered tremendously. It has experienced at least four months of production shutdowns, according to the Los Angeles Times, and it still faces uncertainty in location shoots.

As Jeff Frost, the president of Sony Picture Studios, said to The Wall Street Journal, “’There are discussions about trying to limit location shots,” adding that it would be expensive to relocate production.

Although not all the studios have initiated layoffs, if the effects of the lockdowns continue past this fiscal year, a source with 25 years of experience at a major Hollywood production studio says in a private interview, “It is highly likely they would have to start looking at restructuring.”

These studios are looking at extreme losses over this next year. For example, Sony Pictures had an extremely good year in 2019, but it is projected to be 40% down from last year, with fewer options to make up those funds.

Additionally, WarnerMedia is beginning a new round of layoffs as it changes its organizational structure. “Continuing production is of utmost importance. When you have a big blockbuster, you want it seen on the big screens in the theaters,” the studio source says, “because that’s where you’re going to get your money back.”

But that won’t be possible without the reopening of movie theaters, especially on the East and West Coasts, and a return of patrons. The film industry will see the lasting effects of this as it turns toward streaming platforms that have seen a tremendous growth during the lockdowns.

Actors are facing difficult choices. “If you were somebody who was primarily a background actor, that’s going to have to be a career transition for you,” says Jennifer Shelton, a television and commercial actress from Long Beach, who did a one-on-one interview with me.

Shelton joined the Screen Actors Guild in 1997, and her credits include shows such as “Criminal Minds” and “The Bold and the Beautiful.”

She told me, “If you were somebody who was a day player, so you came in and did a couple lines here or there on shows, that’s kind of a thing of the past.”

Background actors and day players are the first to go when trying to keep sets as minimal and safe as possible, so these actors will need to find other industries to enter in order to survive.

Additionally, crowd scenes are likely going to be created through special effects and trick photography for awhile, according to The Wall Street Journal.

Television is taking advantage of the popularity of reality shows during the pandemic, Shelton explains, which is another hit to the entertainment industry because “reality-based projects don’t use actors.” That means fewer people attached to projects, and fewer projects available to actors.

Leach and Shelton agree it is not the time to be entering the entertainment industry. Live theaters may not last, and if they return it will be more expensive to attend; actors will take a pay cut; and production quality will suffer in the effort to save money.

On the film side, there are already fewer projects, work-starved actors, and overwhelmed agents. “There is so much more on [the agents’] end, tech-wise, that they’re doing that they didn’t have to do before,” Shelton says. “So, they’re stressed. They’re on a skeleton crew.”

The effects of this pandemic and the resulting lockdowns could impact the entertainment industry for years to come. The research firm Ampere Analysis told the Observer that “global film and television industry is projected to lose a staggering $160 billion of growth over the next five years.”

She said, “You ask anybody how they got through the first few months of the pandemic, everyone will say ‘Oh! I watched “Hamilton” on Disney+’ or ‘I was binging my favorite shows on Netflix.’ I mean, everyone was surviving based on what actors were giving them through the arts. … And yet, there was no consideration to how we were surviving.”

While it has been heartbreaking to hear the stories concerning the suffering of the entertainment industry, I have hope that Americans will eventually rally to support the arts that benefit so many communities. Hopefully the impact that live theater and film have on people will be noticed before it is too late to help them.