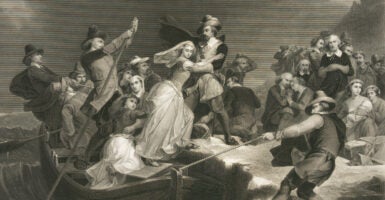 With the Thanksgiving season upon us, a group of scholars is meeting today to discuss the Mayflower Compact, in a webinar series honoring the 400th anniversary of the signing of this quintessential and seminal American document.

Hosted by The Heritage Foundation and the Religious Liberty Institute, the concluding webinar examines the impact of the Mayflower Compact on the concepts of economic liberty and private property in the United States.

Peter Wood, president of the National Association of Scholars and author of the new book “1620: A Critical Response to the 1619 Project,” calls the document “the conceptual starting point of the American experiment.”

By exploring the historical background of the Mayflower Compact, the webinar illuminates the political ideals that emerged during this pivotal time in history.

Arriving in Cape Cod, Massachusetts, in November 1620, the Pilgrims brought with them the economic assumptions present within their own religious congregation, which sometimes conflicted with those of hierarchical English society.

Jim Otteson, visiting scholar at the Feulner Institute’s Simon Center for American Studies at Heritage, emphasizes the religious dimension to their social and economic thinking.

“The fact that the Pilgrims wrote an agreement and voluntarily signed it,” Otteson declares, “presupposes that they saw themselves as morally equal. They signed it as peers and equals, and did not ask the king for permission to do so.”

Those religious believers, he says, perceived one another as made in the image of God. That belief created a social equality among their party and established the fertile soil for economic liberty in New England.

Samuel Gregg, visiting scholar at the Simon Center for American Studies, identifies several assumptions that guided the Pilgrims about private property and economic liberty, and influenced the British colonies and later the United States.

Preeminent in the Pilgrims’ economic worldview was the concept of private property. Unlike their Jamestown counterparts in 1607, the community did not undertake the disastrous and utopian approach of collectivization—that is, the idea that their property would be held in common by the entire community.

Instead, the passengers embarked on the understanding that they would have the right to own and develop their property, for their own good and that of the community.

The second assumption was that of economic liberty. The Pilgrims took seriously the command in Genesis: “Be fruitful and multiply, and replenish the earth, and subdue it.”

Everyone in their company, Gregg says, shared the “expectation that through creative work, economic freedom would enable people to better themselves.”

This biblical outlook catalyzed the congregants to use the resources available to best improve the conditions of their families and thus their congregation.

Another assumption motivating the Pilgrims was their rejection of the declining feudal regime in England. By consciously removing themselves from the socially rigid class system and its obligations, the Pilgrims ensured a great degree of economic freedom.

“The New England economic relationships that were founded at Plymouth,” Gregg says, “were comprised of contracts, obligations, and private property amongst peers, rather than privileges and obligations to others based on legal or social privileges.”

This community of peers, based on contracts and private property, might not strike modern Americans as particularly noteworthy. However, when compared with other colonial enterprises, it appears remarkably modern.

The French and Spanish colonial empires were centralized operations, controlled by government officials in Paris and Madrid. Those mercantilist and militaristic regimes lacked the economic freedom present at Plymouth, which played to their detriment.

“One sees a tremendous economic development in the English colonies,” Gregg says, “whereas others lag behind.” The effects of these centralized colonial practices are still noticeable in the economies of Central America and South America today.

Scholars agree that the signing of the Mayflower Compact helped to introduce in America the principles of religious freedom, the rule of law, and economic liberty that have shaped the United States for 400 years.

While progressive voices decry American institutions as the legacy of a “slave-ocracy,” begun in 1619, when enslaved Africans first arrived in America, the year 1620 offers a more faithful account of the nation’s origins.

“As Thanksgiving approaches, we should recognize that this community at Plymouth was one founded in gratitude,” Wood says. The leftist narrative of oppression, by contrast, “gives way to resentment.”

As Allen Guelzo, a visiting scholar at the Simon Center for American Studies, explains, the signing of the Mayflower Compact—a covenant that helped establish in America a political community of self-governing citizens—ought to be one of the principal reasons for celebrating Thanksgiving.

“Through the murk and confusion of our times,” says Guelzo, “the bright line drawn from the Mayflower still pierces the clouds, and continues to draw us forward today.”