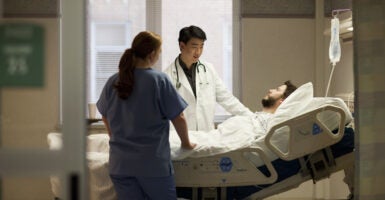 Under legislation being pushed by Democrats in Congress, the health care coverage and choices that individuals and families would or would not get would be what politicians and bureaucrats decide that they could or could not have. (Photo: David Sacks/The Image Bank/Getty Images)

The left’s health policy strategy is simple: Step by step, centralize government control over larger chunks of the health care sector of the economy, add more and more taxpayer subsidies (requiring ever higher taxes), and block the emergence of any independent alternatives for coverage and care.

In the end, the coverage and care that individuals and families would or would not get is what politicians and bureaucrats decide that they could or could not have.

Exhibit A: The radical Democrats’ massive $5 trillion-plus spending bill, which they are trying to fast-track through the reconciliation process.

Under the reconciliation bill language, radical Democrats would make permanent their recent temporary expansion to middle- and upper-income Americans of the tax credit subsidies for Obamacare exchange plans.

That’s bad policy. Not only would that do nothing to bring down the cost of those plans, it would actually create a bigger incentive for insurers to keep raising premiums—since it would shift most of those cost increases from their customers to federal taxpayers.

In tandem with this federal subsidy expansion, the bill would also create a special Medicaid coverage program for all persons with incomes below 138% of the federal poverty level living in states that have not already adopted Obamacare’s Medicaid expansion.

This expansion would be paid for entirely with federal funds, rather than the current combination of federal and state funding, and would move more low-income workers out of private employer coverage and into Medicaid.

Congress should adopt a much better policy, one that would empower patients to secure the health coverage that is best for them, and enable health plans and providers to respond effectively to patients’ wants and needs in a more open, competitive market.

That would entail targeting resources to persons who most need financial assistance, while providing the regulatory flexibility that would reduce premium costs and expand private coverage options for individuals and families.

Congress should also provide low-income people the right to redirect the taxpayer subsidies for their Medicaid coverage toward a private or job-based health plan of their choice. By compelling plans and providers to compete directly for patients’ health care dollars in a new health care market—one where information on price and provider performance is transparent and easily accessible—patients and taxpayers alike would secure better care at lower cost than they do today.

Beyond crowding out Americans’ coverage alternatives, radical Democrats would also create a new program to control the price of prescription drugs throughout the economy.

Each year, the secretary of the Department of Health and Human Services would select a set of 25 drugs from a list of 125 medicines that generate high spending in Medicare and the private sector, compel companies to “negotiate” under the threat of civil monetary penalties, set a target price for the drugs (based on price-controlled pharmaceuticals in six foreign countries), and impose high excise taxes on companies that charge more than the secretary’s fixed price.

Radical Democrats like to describe this as a process of “negotiation,” giving it the patina of a private sector-style business arrangement. It’s nothing of the sort. It’s raw coercion.

Today, the United States is the global champion of biomedical innovation. Reduced returns on investment in research and development, courtesy of price controls, is a costly trade-off.

It will dramatically reduce the number of new medicines developed and will compromise access to quality care for patients.

Demand for prescription drugs is strongest, of course, among Medicare beneficiaries. Rather than imposing a comprehensive regime of government price controls on prescription medications, Congress should build on the best market features of the Medicare Part D program, which today encourages health plan and provider innovation in the financing and delivery of the Medicare prescription-drug benefit.

Congress should improve the situation for patients by setting a cap on seniors’ out-of-pocket drug costs and shifting the burden of covering expensive drugs to insurance plans, while promoting the broader availability of cheaper generic drugs.

Finally, the bill would add dental, hearing, and vision coverage to the traditional Medicare program. Vision services would begin in 2022; hearing benefits in 2023; and dental coverage in 2028.

Private Medicare Advantage plans, seniors’ only alternative to traditional Medicare, already cover such benefits—and at a lower cost to seniors than this bill would entail.

The latest proposal to add these common benefits, staggering their effective dates for political reasons, is testimony to the fundamental backwardness of a politically driven health care program, which depends on legislative or administrative action to add, modify, or improve medical benefits or services.

Since the 1960s, private health insurance plans have steadily added new benefits and services based on emerging medical advances, as well as patients’ needs and preferences, including vital prescription-drug benefits.

Medicare has lagged behind routinely. It was not until 2003—when then-President George W. Bush signed the Medicare Modernization Act into law, after decades of political gridlock—that America’s seniors secured access to drug benefits in the Medicare program. To date, traditional Medicare beneficiaries are still not covered from the financial devastation of catastrophic illness.

Congress could adopt a far superior Medicare policy. Future generations of retirees should not be forced to depend upon the whims of Congress to secure modernized medical benefits and services.

One of the achievements of Medicare Advantage, also created in 2003, is that seniors are empowered with a defined contribution from the government to pick and choose the kinds of health plans and benefits that they want.

To intensify the competition, traditional Medicare should be forced to compete directly with private health plans on a level playing field in a modernized system of retiree coverage based on consumer choice and competition.

Such a modernization, based on patient choice and market competition, would stimulate innovation in benefit design and care delivery, control health care costs, and deliver better value for seniors’ health care dollars.

The spending bill, aggrandizing more federal power and control over Americans’ health care, is yet another step in the direction of government-run national health insurance. That’s a dead end with no choice and no exit.

The next Congress should reverse course and open up the health care markets, break down barriers to plan and provider competition, and maximize the opportunity for all Americans—including the poor—to choose the coverage and care that they want.