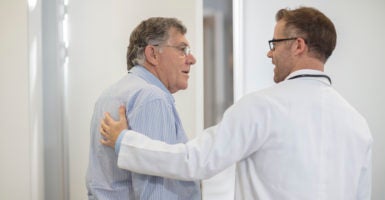 The prominent research firm Avalere recently published a major study showing that Medicare Advantage generally outperformed traditional Medicare. This was especially so in caring for the most challenging patients who suffer from chronic conditions and complicated medical problems.

Major structural differences between traditional Medicare and Medicare Advantage largely account for the differences in performance.

After almost two futile decades of trying to control costs, in the 1980s Congress overhauled hospital and physician payment. In 1989, Congress created a new physician payment system in which the government would reimburse Medicare doctors based on a calculation of the putative value of individual medical services—including the resources and time required to provide them—and capping the payment.

This bizarre reimbursement formula, plus subsequent payment updates, proved faulty. Medical stakeholders compromise the entire process because they also are involved in setting the prices of Medicare’s services and continuously fight to evaluate their own services higher, leading to questionable fee schedules, confusion, and inefficiency.

Congress created Medicare Advantage in 2003 as a new and improved market-based alternative to traditional Medicare, where private health plans, paid on a defined contribution basis, would provide comprehensive as well as tailored benefits and services to senior and disabled citizens.

Medicare Advantage turned out to be immensely popular, evident by sharply increasing annual enrollment. Today, those plans enroll 36 percent of all Medicare beneficiaries and the number should reach 41 percent by 2027.

Since its inception, Medicare Advantage has not escaped criticism. Initially, critics focused on failure to achieve cost savings. They also charged Medicare Advantage plans with using schemes such as gym memberships in selectively choosing healthier patients.

In fact, many of these early studies were narrow in scope. By contrast, the Avalere study used a much broader dataset known as the MORE2 Registry to generate representative samples of 1,813,937 Medicare Advantage beneficiaries to compare against data from the Centers for Medicare and Medicaid Services for 1,376,573 traditional Medicare beneficiaries.

Avalere’s results confirm previous findings in the professional literature. For instance, a large 2015 study in the American Journal of Managed Care found that relative resource use, the medical resources used to treat disease, was lower in Medicare Advantage compared to traditional Medicare patients with diabetes and cardiovascular conditions.

A Health Affairs study found that the increasing proportion of enrollees on Medicare Advantage was associated with a decrease in per capita spending under traditional Medicare.

Counties that had larger increases in Medicare Advantage spent less per patient on Medicare, suggesting that it delivered more cost-effective care than traditional Medicare and was able to generate cost savings throughout the system.

The availability of more comprehensive data shows that Medicare Advantage is, in fact, a genuine advantage for Medicare beneficiaries. As this latest Avalere study indicates, Medicare Advantage is more cost-effective than traditional fee-for-service Medicare, especially in treating patients with complex medical problems.

Congress and President Donald Trump should recognize the success of the Medicare Advantage program and its superior performance in serving Medicare beneficiaries in a cost-effective fashion while increasing their quality of care.

Future reform of Medicare is necessary, and Washington policymakers should build upon this successful expansion of personal choice and market competition.

Celine Bookin, a member of the Young Leaders Program at The Heritage Foundation, contributed to this article.