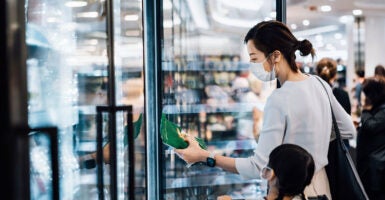 There seems to be something for everyone in the massive spending packages working their way through Congress. And with a price tag of $4.6 trillion, or $37,400 per household, offering something for everyone—government-paid family leave, monthly child payments, free community college, union dues write-offs, a $12,500 electric vehicle tax credit, or new bike paths—is easy.

Politicians who want to grow government like to talk about how great this grab bag will be for workers, families, and the economy. And they promise that only big corporations and really wealthy people will pay higher taxes.

But that’s like selling a souped-up Lincoln Navigator to a family that wants a minivan, reasoning that both require the same down payment.

Families deserve to know how much big government policies will cost them—not only in taxes, but in how those policies will affect their paychecks and the prices they pay for everything from gas and groceries to utilities and child care.

President Joe Biden promised that he wouldn’t raise taxes on anyone making less than $400,000, but Congress’ official nonpartisan scorekeepers said his plan would raise taxes on millions of middle-class families.

Of course, taxes aren’t the only thing that affect families’ budgets. The income that workers earn, and the prices they pay for goods and services, also determine a family’s bottom line.

Corporations seem like an easy target for tax hikes because we think of them in abstract ways—as corporate logos and big buildings. But logos and buildings don’t pay taxes.

Across the country, companies would be hit with large tax hikes that economists agree would mostly be paid for by employees of those businesses through lower wages, less work, and fewer benefits.

After $6.5 trillion in COVID-19 spending, and the Federal Reserve buying more than half of the massive increase in U.S. debt during the past year, the risks of inflation are high. Another $4.6 trillion in spending between the $1.1 trillion infrastructure package and the $3.5 trillion big government package would further stoke inflation and fiscal crisis risks.

And finally, so-called green energy policies will drastically increase costs for ordinary Americans, while creating special benefits for wealthy Americans and corporations. For example, the current $2,500-$5,000 electronic vehicle tax credit that overwhelmingly benefits corporations, California residents and individuals with more than $100,000 of income would be increased to as much as $12,500, even as ordinary Americans receive zero tax credits—and higher energy bills.

According to an analysis from The Heritage Foundation, the Green New Deal would cost every American $1,991 per year over the next decade, or nearly $8,000 per year for a family of four.

Instead of trying to sell Americans on policies that redistribute workers’ earnings and redirect families’ choices, lawmakers should seek policies that help all Americans achieve rising incomes and greater freedom to pursue the choices that are best for them.