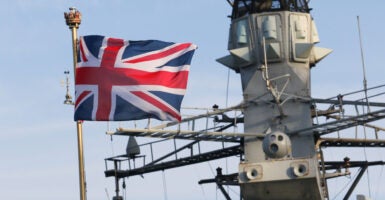 The British armed forces needed this help badly. Since 2000, when the world looked a lot less dangerous, British defense spending has barely kept up with inflation, much less grown. Indeed, as a share of gross domestic product, it’s shrunk.

In 2000, Britain was spending 2.55% of its GDP on defense. In 2019, it spent 2.3%—and that now includes military pensions. Drop the pensions from the calculation, and Britain is perilously close to falling below the NATO 2% minimum it’s committed to maintain.

The announced increase, the biggest commitment Britain has made to defense since the end of the Cold War, should ensure that Britain upholds that NATO pledge. It will also allow the government to follow the U.S.’ lead in establishing a new Space Command, and to build up a new National Cyber Force.

The increase is also valuable as a demonstration that the U.K. is not abandoning its role as a major power in the wake of Brexit. The idea that leaving the European Union meant a retreat into isolationism was always foolish, but this announcement is further proof that Britain remains committed to playing a significant role in the wider world.

It’s encouraging as well that the opposition Labour Party has largely welcomed the announcement, adding only that it should have come sooner. Indeed it should have. The new commitment will also mean more if it is genuinely new money.

And that is the fundamental issue. Since 9/11, British governments have called the nation’s armed forces into action time and again—but have not been willing to pay the bills. The result was that Britain’s capabilities shrank, and the men and women on Britain’s front lines lived on increasingly narrow margins.

Their can-do spirit does the British forces great credit, but asking for more while paying for less will sooner or later lead to a disaster. Thursday’s announcement offers hope that Britain has broken this cycle, and that its willingness to deter and to fight will now be backed up by a government willing to commit new resources to the defense budget.