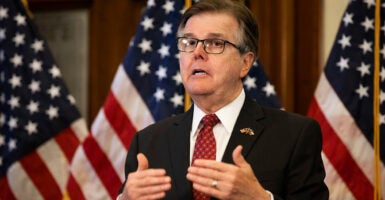 Texas Lt. Gov. Dan Patrick, a Republican, is offering up to $1 million of his own money for anyone who comes forward with evidence of voter fraud.

The reward is to “incentivize, encourage, and reward people who come forward and report voter fraud,” Patrick said Tuesday, reflecting President Donald Trump’s own efforts to amplify claims of fraud as well.

“I support President Trump’s efforts to identify voter fraud in the presidential election and his commitment to making sure every legal vote is counted and every illegal vote is disqualified,” Patrick said in a statement Monday.

“President Trump’s pursuit of voter fraud is not only essential to determine the outcome of this election, it is essential to maintain our democracy and restore faith in future elections,” he added.

The Associated Press and other outlets declared former Vice President Joe Biden the election’s winner Saturday, but Trump has refused to concede, saying that voter fraud is why he trails in multiple states.

Though some congressional Republicans have congratulated Biden and urged Trump to provide evidence of voter fraud, most have supported his messaging.

While Patrick’s announcement earned praise from Trump, others criticized him.

Thanks Dan. Big win for us in Texas! https://t.co/MqNSOf6AWP

I’d like to collect your handsome reward for reporting voter fraud.

I got a dude in Forty Fort, PA who tried to have his dead mom vote for Trump.

Though Trump lost the election, he won Texas by over 600,000 votes.