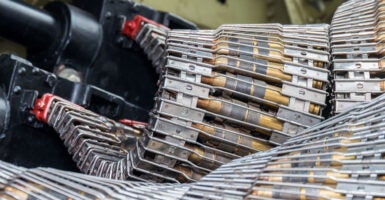 In 2017, Lawrence Bass died at an Army ammunition plant when the ammunition components he was handling exploded. He and one other man have died in the last 10 years due to improper working conditions at government-owned ammunition manufacturing facilities.

These avoidable accidents are at the top of a long list of issues at our nation’s ammunition plants—issues that threaten both employees’ lives and our national defense.

The United States military currently has five ammunition production facilities in operation, many of which have been active since World War II. One of these, the Lake City Army Ammunition Plant in Independence, Missouri, is the site where Bass lost his life.

Despite the Army’s improvements to meet current modernization requirements, there are still many safety and security risks associated with these sites.

Few processes at these ammunition plants are automated. That means employees are still standing in front of thousands of pounds of molten explosives as they fill artillery shells by hand, among other high-risk job requirements.

At a congressional hearing on Sept. 22, the assistant secretary of the Army for acquisition, Bruce Jette, explained that Bass “should never have been in such close proximity” to explosive material, especially when better technological alternatives are feasible.

“We need to take the possibility of human error out of the equation,” said Jette.

The issues go beyond worker safety: Thousands of other American lives are in harm’s way due to outdated domestic infrastructure in our Army ammunition production plants.

These plants provide munitions for all U.S. military services, other government agencies, and occasionally allied nations. So, if a problem occurs at one of these plants because of outdated infrastructure, the entirety of the U.S. military would feel the effects.

The lack of investment in modernizing these government-owned facilities limits our military’s supply of ammunition and makes that supply more fragile. In a war, that would spell problems for the United States.

One factor that makes this supply chain fragile is the risk of having a “single point of failure”—in other words, having a concentration of production at a single facility.

Take, for example, the Holston Army Ammunition Plant. It is the primary facility for the production of explosives that the Army uses in various bombs and other weapons. Given that this site is the only U.S.-based manufacturer of these products, there is a much greater risk of this site being targeted by an adversary in times of conflict.

Even if the plant is not targeted, there is still a question of readiness capabilities during a surge period.

Dependence on overseas suppliers is another growing threat to the ammunition industrial base.

The Department of Defense relies on over 50 foreign suppliers in the production of ammunition, with some materials being sourced from China. With a considerable portion of the defense supply chain being foreign-dependent, there is much greater risk for disruption of production, especially in times of global conflict.

If such facilities or operations were shut down, the entire supply chain would be at risk, causing ammunition manufacturing to come to a screeching halt.

The fact that men like Bass have died as a result of poor work conditions should be inspiration enough to spark change across ammunition manufacturing. Add to that the glaring security threat of foreign involvement in our defense supply chain and the concern of single point of failure, and the result is a compelling case for reform.

On Oct. 15, Jette announced an Army 15-year plan for a “holistic transformation” of the Army Organic Industrial Base, a subset of the larger U.S. defense industrial base, which includes ammunition plants. While the process is long, this transformation is vital for the safety of our nation and its workers.

The 15-year plan announced in October (while still being drafted) would make this concept possible by facilitating the transformation of equipment, layout, and processes of the five national plants.

By redesigning already existing sites, these facilities will be better prepared for “flexible execution,” which would allow facilities to ramp production up or down, helping to meet surge requirements in times of crisis.

Gen. Edward Daly, the other witness present with Jette at the congressional hearing, discussed what it will financially take in order to make necessary improvements. “I don’t necessarily think it’s going to be more expensive,” he said. “[It’ll be] a more focused investment strategy.”

The Army has the resources and funding right now to be able to reprioritize spending to modernize technology in the plants and ultimately save the lives of workers as a result.

Should these measures end up needing more funding down the road, the modernization of technology and revitalization of research and development would ultimately lead to greater safety, efficiency, and return on investment in the long run.

Both Jette and Daly made it clear: Effective modernization of Army ammunition production is realistic and doable. It is time the ammunition industrial base gets a reboot. The lives of American workers depend on it.