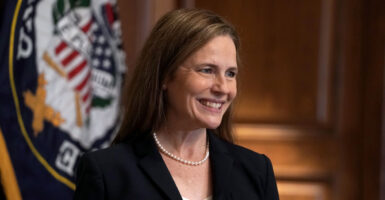 Rose Laoutaris is a junior at American University majoring in communications, legal institutions, economics, and government, and an intern at The Heritage Foundation’s Feulner Institute.

Allison Hayman is a fourth-year political science student at the University of Georgia and an intern at The Heritage Foundation’s Feulner Institute.

Lauryn Melanson is a junior and history major at Hillsdale College and an intern in the Center for American Studies at The Heritage Foundation’s Feulner Institute.

Three members of The Heritage Foundation’s Young Leaders Program, who are currently interning at Heritage’s Feulner Institute, share their thoughts on what the confirmation of Justice Amy Coney Barrett means to them personally.

‘A Role Model to Conservative Women,’ by Rose Laoutaris

Justice Amy Coney Barrett is a powerful role model for conservative women like me, especially those who are pursuing politics or law. She is proof you can have a family and a successful career. This is something you would think feminists would applaud her for, but instead they attack her for not fitting their mold.

Culture today often tries to force women to choose between having a career and a family. So, as a young woman who wants both, seeing a mother with a large family on the highest court is both encouraging and inspirational. If those weren’t enough reasons to admire her and aspire to be like her, Barrett also is a devout Catholic, pro-life, and has adopted two children.

In addition, Barrett is highly intelligent, as seen during her confirmation hearings where she answered tough questions from senators on the Judiciary Committee and held up her blank notepad to show that all of her answers were completely from memory. Not only is she a good person with strong conviction, but she is able to defend her beliefs and knowledge exceptionally well.

I am excited to see a Supreme Court justice with the moral character and intelligence of Amy Coney Barrett, and I believe she will inspire women like me for decades to come.

‘A Leader of Genuine Character,’ by Allison Hayman

As a student and young woman with a passion for American government, I am thankful to have witnessed the nomination of Justice Amy Coney Barrett and to see her confirmed by the Senate.

Barrett is both intelligent and abundantly accomplished, and her commitment to serving those around her through her personal and professional endeavors is meaningful to me.

She has a reputation for being an impactful mentor to her former students at Notre Dame Law School and an inspiration to her colleagues in pursuing excellence. She also remains faithful to her religious beliefs and balances a close-knit family of young children.

Barrett stands strong in her convictions, but she has proven to be an impartial judge who respects the U.S. Constitution and promotes fairness. These qualities demonstrate her honorable moral character, which should be regarded higher than any political debate or affiliation.

I hope to one day serve others as genuinely as Barrett while pursuing my dreams of having a successful career, faith-centered family, and meaningful relationships. It is an honor to experience this monumental event in our nation’s history.

‘Grace Under Fire,’ by Lauryn Melanson

Prior to her nomination, I did not know much about Justice Amy Coney Barrett. I have since learned about her previous experience and watched her endure her confirmation hearings in front of the Senate Judiciary Committee, and I was struck by her poise when under attack from sometimes hostile questioning.

Barrett had to constantly defend her faith and beliefs in a way the Constitution does not require. She faced claims that were irrelevant to her ability to impartially look at the facts of each case and make decisions according to the text of the Constitution.

It was inspiring to see a women who repeatedly responded calmly and respectfully when challenged by senators on the committee to defend her viewpoints on cases such as Roe v. Wade and the Affordable Care Act.

Barrett did not let partisan lines affect how she conducted herself. She was graceful under fire and an amazing example for me as a young conservative woman. She demonstrated the bravery necessary to face adversity regarding faith, family, moral character, and personal beliefs.

Barrett proved she not only could do the job, but that she could excel at doing it and keep her principles intact.