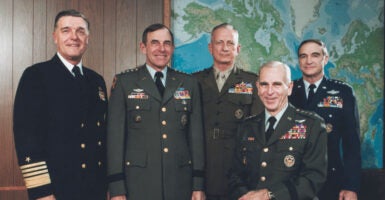 Gen. Edward Charles “Shy” Meyer died on Tuesday. He was 91. He is pictured here, second from the left, with his fellow joint chiefs of staff at the Pentagon in 1982. (Photo: Bettmann/Getty Images)

America lost an esteemed Army leader this past Tuesday with the death of Gen. Edward Charles “Shy” Meyer.

Meyer, who died at 91, served his country as an Army officer for 32 years and left a legacy of reforms to the Army as chief of staff.

A 1951 graduate of the U.S. Military Academy at West Point, Meyer began his career commissioning as a second lieutenant and attending infantry school in Georgia at Fort Benning.

Early in his career, he served in the Korean War, earning Silver and Bronze Stars, and served in two tours in Vietnam, where he earned a Silver Star, a Purple Heart, and a Distinguished Flying Cross.

He has been described by those who served with him as “compassionate,” “tough,” and “admired” because he “understood people.”

Meyer continued his education throughout his career, earning advanced degrees from both National War College and George Washington University, among other educational endeavors. He even served as the deputy commandant of the Army War College.

Later in his career, Meyer served in the Pentagon as the Army’s deputy chief of staff for operations and planning. In 1979, President Jimmy Carter selected Meyer, a three-star general at the time, to replace Gen. Bernard Rogers as Army chief of staff. At just 50 years old, Meyer became one of the youngest Army chiefs of staff in history, and leaped over at least 15 higher ranked officers to earn the promotion.

This promotion came as little surprise to Meyer’s colleagues, who told The New York Times in 1979 that his promotion was “inevitable” because of his “perfectly balanced career.”

As Army chief of staff, Meyer sought to revamp what he notably described as a “hollow Army,” which suffered from inadequate staffing levels, training, and equipment. To drive up voluntary enrollment in the Army after the Vietnam War draft, Meyer increased pay for enlisted service members and noncommissioned officers, as well as for educational benefits and opportunities.

Finally, with the help of increased defense budgets under President Ronald Reagan, Meyer was able to shift the Army from its Cold War posture, emphasizing heavy equipment, like tanks, to lighter vehicles and modern weapons systems.

By the time he retired from service in 1983, Meyer had transformed “the Army from the dispirited, troubled post-Vietnam force to the professional and superbly trained and equipped Army of Desert Storm,” Eliot Cohen, dean of the Paul H. Nitze School of Advanced International Studies at Johns Hopkins University, told The Washington Post.

After his 32-year Army career, Meyer served on boards in both the corporate and policy worlds, including on the boards of the Hoover Institution and the Center for Strategic and International Studies. The Army remained his passion, however, as he served as president of Army Emergency Relief for over 20 years.

Meyer leaves behind a legacy of service, sacrifice, and respect. “Every soldier that served any day of their career under General Shy Myer was lucky. He loved and cared for his soldiers. He was a strong, principled, skilled leader and warrior,” said James Carafano, vice president for the Kathryn and Shelby Cullom Davis Institute for National Security and Foreign Policy at The Heritage Foundation and a retired Army lieutenant colonel.

Meyer is survived by his wife of 64 years, Carol; his five children; seven grandchildren; one great-grandchild; and one brother. Our nation owes a debt to Gen. Edward Charles “Shy” Meyer for his service, leadership, and dedication to our country.