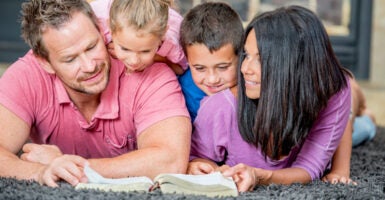 The Supreme Court released orders Monday granting some petitions that it hear certain legal cases and denying others. One particular denial was unusually interesting.

The high court said it won’t hear the petition of Kim Davis, who, while clerk of the court in Rowan County, Kentucky, refused to give marriage licenses to same-sex couples in 2015. But that’s not the interesting part.

When Supreme Court justices, in legal lingo, “deny cert” (that is reject a petition for a writ of certiorari), often they’ll just deny the request for review of a lower court decision and move on. Sometimes, though, they’ll opine about it a bit.

In it, Thomas explains how Obergefell v. Hodges, the high court’s landmark 2015 ruling mandating every state recognize same-sex marriage, threatens Americans with sincerely held religious beliefs—just as some justices predicted it would five years ago.

In short: Those who don’t support same-sex marriage because of their religious beliefs are labeled as bigots. Their right to freely exercise those beliefs may be undermined, even destroyed.

Thomas, joined by Alito, writes that the rationale for Obergefell was “found nowhere in the text” of the Constitution:

Several Members of the Court noted that the Court’s [Obergefell] decision would threaten the religious liberty of the many Americans who believe that marriage is a sacred institution between one man and one woman. If the States had been allowed to resolve this question through legislation, they could have included accommodations for those who hold these religious beliefs. …

The Court, however, bypassed that democratic process. Worse still, though it briefly acknowledged that those with sincerely held religious objections to same-sex marriage are often ‘decent and honorable,’ … the Court went on to suggest that those beliefs espoused a bigoted worldview.

But the two justices’ comments about the Obergefell decision’s effects on religious freedom are compelling for anyone with sincerely held religious beliefs who seeks to live them out peacefully. Even if, or perhaps in spite of the fact that, those religious beliefs conflict with the current law of the land about same-sex marriage.

Obergefell enables courts and governments to brand religious adherents who believe that marriage is between one man and one woman as bigots, making their religious liberty concerns that much easier to dismiss.

Thomas and Alito’s remarks set off the progressive left, who seemed to misread it—intentionally or not, it’s hard to tell. Journalists and politicians further interpreted what their opinion could mean for the future of the Supreme Court in a way that seemed completely far-fetched. Both observations are important to address.

A Slate writer tweeted: “Thomas (joined by Alito) wrote a jaw-dropping rant taking direct aim at Obergefell and suggesting that SCOTUS must overturn the right to marriage equality in order to protect free exercise [of religion].”

Pete Buttigieg, the former mayor of South Bend, Indiana, who sought Democrats’ presidential nomination this year, tweeted: “So much for precedent and judicial restraint. Two justices now openly call for an end to marriage equality—knowing reinforcements are on the way. The stakes could not be higher.”

Buttigieg, who is gay, married partner Chasten Glezman in 2018.

Another blue-check social media account, lawyer and transgender rights activist Chase Strangio, tweeted: “First day of the SCOTUS term and Alito and Thomas call for the overturning of Obergefell.”

For starters, nowhere in this opinion does Thomas or Alito appear to call for Obergefell to be overturned, in part because that’s not really how it works.

The Supreme Court would have to grant a petition challenging Obergefell and then a majority of justices would have to agree to overturn precedent. It’s not impossible,but it’s unlikely.

Second, Thomas clearly was taking the opportunity presented by the Davis case to demonstrate precisely 1) what poor legal framework enabled Obergefell to create a precedent for same-sex marriage and 2) just how that landmark decision based on something that doesn’t exist in the Constitution infringes on the “free exercise” rights that do.

To anyone who read the dissents in Obergefell, the fact that Thomas and Alito vehemently disagreed with the decision is hardly new. They did so in 2015 as well.

Only then, they had Justice Antonin Scalia practically outdoing them with biting commentary, including my personal favorite—Scalia’s confession that if he ever started out an opinion the way Justice Anthony Kennedy did in making his case for legalizing same-sex marriage nationwide, he would be so mortified he would run for cover. Scalia, who would die the following February, wrote:

If, even as the price to be paid for a fifth vote, I ever joined an opinion for the Court that began: ‘The Constitution promises liberty to all within its reach, a liberty that includes certain specific rights that allow persons, within a lawful realm, to define and express their identity,’ I would hide my head in a bag. The Supreme Court of the United States has descended from the disciplined legal reasoning of John Marshall and Joseph Story to the mystical aphorisms of the fortune cookie.

The fact that this colorful anecdote from Scalia lay in a tiny footnote made it even more wonderful.

It’s true, Obergefell was manufactured. The right to gay marriage, much less to mandate all states recognize it, exists nowhere in the Constitution—not even a little bit.

Thomas and Alito were right to point out then, same as now, that anyone who states this fact is called out as a “bigot” rather than someone with sincerely held religious beliefs or someone who interprets the Constitution as it stands.

The fabrication of the Obergefell ruling from an exaggerated interpretation of the Constitution has created consequences far beyond its scope for people who would live their lives in line with their faith.

The Davis case is just another example.

The Obergefell decision isn’t going anywhere, and honestly couldn’t unless extraordinary circumstances were at play. And the justices weren’t saying that.

What Thomas and Alito were doing is just what they should be doing: reminding the rest of us, advocates and opponents of same-sex marriage alike, just what a poor precedent the Obergefell ruling set. And how much it hurts religious liberty, a fundamental aspect of America’s core values.