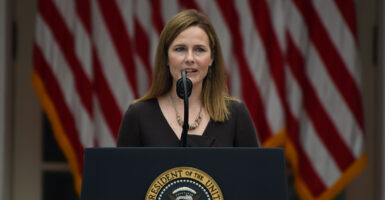 Judge Amy Coney Barrett speaks Saturday evening after being nominated to the Supreme Court by President Donald Trump in the Rose Garden of the White House. (Photo: Olivier Douliery/AFP via Getty Images)

If this sounds familiar, it’s because these same people used this same line of attack in a failed attempt to derail Barrett’s nomination to the 7th U.S. Circuit Court of Appeals in 2017.

The most memorable part of those proceedings was the accusation by Sen. Dianne Feinstein, D-Calif., to Barrett that “the dogma lives loudly within you.”

Barrett, like many other notable justices before her, including Antonin Scalia and Clarence Thomas, is a devout Catholic. Barrett’s faith is a problem for some people, notably Sen. Mazie Hirono, D-Hawaii, who when asked if Barrett’s faith was off limits responded: “No.”

Slightly more sophisticated opponents, however, are quick to say that it’s fine for Barrett to be Catholic, but it’s bad for her to use her religious beliefs to decide cases.

Former Rep. Katie Hill, D-Calif., put it this way: “If her religion never made it into her court decisions, she can believe what she wants.”

Note the hidden premise. Hill assumes that Barrett decides cases based on her religious views.

Lawfare editor Susan Hennessey was more direct: “Barrett’s personal faith is entirely unobjectionable,” she said, but Barrett’s “clear intention of imposing her private beliefs, including religious views, on the American public” disqualifies her.

There’s one glaring problem with this line of attack: It is totally, completely, 100% without factual support.

If you click on the links provided above and review the assertions by Hill and Hennessey, you’ll notice that they offer no support for their conclusions. Neither points to a single judicial opinion, scholarly article, or speech supporting the claim that Barrett has decided or would decide any case based on her private or religious views.

They couldn’t if they wanted to. No such opinion, article, or speech exists.

In response to written questions from a senator, she said: “I do not think it lawful for a judge to impose personal opinions, from whatever source they derive, upon the law.”

In a speech that was in part about  Scalia’s legacy, she explained that judges should not be conservative in terms of partisan politics, but should embrace a conservative view of  judges’ role in our government.

The reason is as simple as it is intuitive: If a judge rewrites a law according to his or her personal views, then “it ceases to be the law that has democratic legitimacy.”

These are just a few of the hundreds of examples of this sentiment articulated in Barrett’s writings and speeches.

To declare that Barrett suddenly will do an about-face and start deciding cases based on her religious views takes a lot of faith. Bad faith.

Nothing supports the claims by Hill and Hennessy but the bad-faith assumption that religious people cannot separate their faith from the job of judging.

Never mind that plenty of judges do that every day. Scalia—the foremost champion of judges’ getting out of the way of democracy—did it expertly, and with style.

Barrett’s writings and speeches provide all the confidence you could ask for that she will do the same, interpreting laws according to their text and making sure to avoid the trap of usurping the democratic process.

It makes one wonder, then, why progressives are so hell-bent on pressing this spurious attack on Barrett.  Why not attack her commitment to originalism and textualism—two methods of judicial interpretation that say, respectively, that the Constitution and statutory texts should be interpreted according to the words as written?

To put it simply, an argument against those methodologies is a losing argument.

Given the choice between a judge who imposes her views on the law and a judge who restricts her own power so as not to trample on the will of the people, which would you pick?  Bear in mind that you can’t always pick a judge whose personal views align with yours.

The truth is that many progressives want judges who impose their views on the law, provided those views are progressive. They’ve cheered as the Supreme Court, over the past 60 years or so, has circumvented the democratic process to rewrite the Constitution in ways that advance progressive causes.

But they’re terrified of a politically conservative judge who would do the same thing. So much so, in fact, that even though there is no evidence that Barrett will impose her personal views on the law—and a mountain of evidence that she won’t—it’s all her critics can think about.

This boils down to one of two things: a fear that someone with Christian views will behave the way progressives want progressive judges to behave, or a total inability to understand that some judges, like Barrett, truly believe that judges can and should be objective.

After looking at Barrett’s record, only with the faith of a mustard seed could you believe that she’ll decide cases based on her faith.