If Wonder Woman Can Get the Job Done Pregnant, So Can You 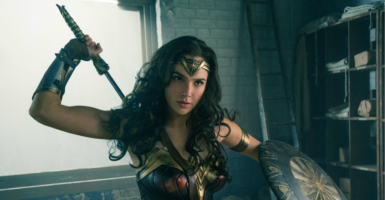 When she was five months pregnant, actress Gal Gadot shot some of her fighting scenes. (Photo: DC Entertainment/ZUMA Press/Newscom)

The new superhero movie “Wonder Woman” is blowing away expectations and crashing through glass ceilings with an opening weekend that brought in $100 million domestically—a record for a movie directed by a woman.

But here’s another fun fact that shows you can proudly be pro-mom and pro-career woman: Israeli actress Gal Gadot was five months pregnant with her second child when she did reshoot scenes for the movie that included a climactic battle scene.

To get around her then-visible baby bump, costumers cut an ample triangle on her iconic suit and replaced it with a bright green cloth that allowed the movie’s special effects team to change her figure post-production.

Given the prevailing negative news that shows women facing all sorts of career challenges by wanting to have a baby, it’s refreshing to see a successful woman embrace her pregnancy and still do an exceptional job.

Because by five months (especially with your second child), your belly is likely extended to support a baby that is about the size of a banana from head to rump. From sore muscles to headaches and heartburn, it is understandable that pregnant women might not feel like superheroes but their contribution to America’s future is crucial.

According to Mollie Ziegler Hemingway in The Heritage Foundation’s 2016 Index of Culture and Opportunity, America’s fertility rate—the average number of children a woman has over her lifetime—has been on the decline for the past decade.

In addition to posing risks to the general economy, a declining fertility rate poses risks to our military, entitlement state, and even the growth and vitality of houses of worship and community health centers.

With many millennial women delaying marriage and even having children, it is important they see successful peers not letting careers stop them from taking on one of the toughest jobs out there—the job of physically bearing a child and rearing it.