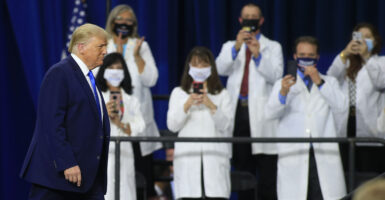 "It is the official policy of the United States government to protect patients with preexisting conditions,” President Donald Trump says Thursday in Charlotte, North Carolina. Pictured: The president arrives on stage to deliver his remarks. (Photo: Brian Blanco/Getty Images)

“Under the America First health care plan, we will ensure the highest standard of care anywhere in the world, cutting edge treatments, state-of- the-art medicines, groundbreaking cures, and true health security for you and your loved ones,” Trump told his audience in Charlotte.

The president also talked about actions his administration has taken to reduce the cost of prescriptions, increasing accountability for veterans’ health care, expanding insurance options, and allowing terminally ill patients the opportunity to try lifesaving drugs that have not gotten final government approval.

“The historic action I’m taking today includes the first-ever executive order to affirm it is the official policy of the United States government to protect patients with preexisting conditions,” Trump said. “So, we are making that official. We are putting it down in a stamp, because our opponents, the Democrats, like to constantly talk about it [as something the administration opposes], and yet preexisting conditions are much safer with us than with them. And now we have it affirmed.”

“The president is declaring that it is the policy of the United States to provide protections to ensure that Americans with preexisting conditions are protected regardless of whether the Affordable Care Act is unconstitutional and its protections for preexisting conditions invalidated,” Health and Human Services Secretary Alex Azar told reporters in a conference call before Trump’s North Carolina event.

The Trump administration supports a lawsuit by 18 Republican state attorneys general who sued to challenge the constitutionality of the Affordable Care Act, popularly known as Obamacare, after Congress dropped the individual mandate from the law in 2017.

The Supreme Court’s 5-4 ruling in 2012 to uphold Obamacare was based in part on its interpreting the individual mandate—which requires most American adults to purchase health insurance—as a constitutionally imposed tax.

“The ACA failed to provide sufficient protections for Americans with preexisting conditions,” Azar said of the Affordable Care Act. “They may have the ability to purchase a [health insurance] plan, but it may be utterly unaffordable given that premiums more than doubled in the four years following the ACA’s implementation.”

Elaborating, Azar said that providing those protections for Americans with a preexisting condition might involve legislation from Congress.

If the Supreme Court strikes down all or a large part of the Affordable Care Act, what the president is making clear in this executive order is that it is the policy of the United States that people who suffer from preexisting conditions will be protected. We will work with Congress or otherwise to ensure they are protected.

The health and human services secretary said the Trump administration will first seek a congressional remedy for “surprise medical bills,” meaning when a  health care provider doesn’t inform a patient about the full cost of care until after it is given.

“The president will direct me as secretary to work with Congress [to pass] legislation …  that will protect patients against surprise medical bills,” Azar said, “and if some legislation is not passed by Jan. 1, then he will instruct me to investigate executive action and regulator action that we can take to ensure that patients are nonetheless protected against surprise medical bills.”