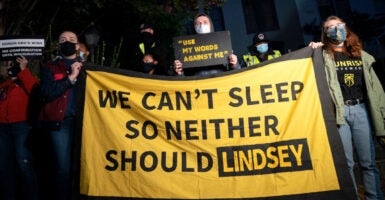 If at first you don’t succeed, burn down your opponent’s house.

Or at least protest right outside, bringing fear and terror to the private quarters and lives of the nation’s lawmakers.

That seems to be the current mantra of 2020. In a year roiled by leftist violence, with small business owners in cities across the country left with looted and destroyed shops, with two dead in Seattle’s “Capitol Hill Autonomous Zone,” no liberal leader seems to be willing to yell “stop.”

Now with emotions high over the unexpected Supreme Court vacancy, the politics of personal intimidation are back with a vengeance.

On Monday morning, there was a protest at Senate Judiciary Chairman Lindsey Graham’s home in Washington, D.C.

There was also a protest at Senate Majority Leader Mitch McConnell’s home in Kentucky on Saturday:

And an attempted protest at his Washington, D.C., home Friday night:

One individual decided to heckle McConnell at his Washington, D.C., home on Monday night:

And if you’re thinking, even a little, that, say, perhaps emotions were high right after the death of Justice Ruth Bader Ginsburg, and that perhaps this was just some one-time poor behavior, think again:

Just to refresh everyone’s memory, in 2017, there was nearly a massacre of Republican lawmakers by a man whose politics leaned left.

“He protested with Occupy Wall Street and became an emphatic supporter of socialist Bernie Sanders, volunteering for the Vermont senator’s presidential campaign,” reported Washingtonian, adding: “’Trump Has Destroyed Our Democracy,’ [the shooter] wrote in a Facebook post a couple of months after the 2016 election. ‘It’s Time to Destroy Trump & Co.’”

Before he began spraying bullets across the baseball field, the shooter checked with Rep. Jeff Duncan, R-S.C., who was leaving the practice, that the lawmakers present were Republican.

What happened next was unimaginable.

“I was probably 20 steps from the guy when he fired his first shot, and I was the first one to yell out to [Mississippi Rep.] Trent Kelly,” Rep. Gary Palmer, R-Ala., told The Daily Signal. “He was at third base, I was at shortstop … I yelled out, ‘That was a gunshot.’”

“Instead of running in a straight line, [Kelly] zigzagged to his left and then to his right, a tactic he’d learned in the Army,” Washingtonian reported. “He was halfway to second base when he heard shot number two crack past his left shoulder. Convinced the gunman was still aiming for him, he darted to his right and raced toward first base. He cut behind the pitcher’s mound just as the third shot sizzled by his chest.”

Rep. Roger Williams, R-Texas, who would later fall off a chair during a hearing because he was so startled by the sound of the gavel, hid in a dugout with Rep. Mo Brooks, R-Ala., and then-Sen. Jeff Flake, R-Ariz. “All we could hear was this guy firing this … weapon,” Williams told BuzzFeed.

“One of the staffers scrambled up over the fence,” Sen. Rand Paul, R-Ky., told MSNBC in an interview. “It was probably a 15-20-foot fence, and he did it in about two seconds. I’m on the outside of the fence, and he and I are hiding behind the tree but the gunshots are landing in the dirt in the outfield and around us.”

Steve Scalise knew he was shot instantly. He felt something as he was trying to turn away from the shooter. ‘My legs gave out, and I fell down.’

He knew he had to keep moving or risk another bullet. …

And so one of the most important politicians in America started crawling, using his arms to pull himself toward the outfield from second base. He started praying. He started moving less and less.

After he’d reached shallow grass in right field, his arms gave out.

“I can still taste the dirt in my mouth when I hit the ground, that parched dirt,” then-Rep. Mike Bishop, R-Mich., told The Daily Signal. “It’s just a sensation that you will never forget.”

So why am I sharing all this old news?

Because those who don’t know history repeat it.

Sentiments are high right now. And of course, peaceful protests—the actually peaceful ones, not the infernos CNN glibly describes as peaceful—are a proud and important part of our nation’s traditions.

If you don’t think Ruth Bader Ginsburg’s vacancy should be filled before the election, guess what? You’re welcome to let your lawmakers know your opinion (and they all have dedicated staffers to listen to your perspective). You are welcome to go to their offices or to the Capitol or the Supreme Court or any number of public places and protest. You can write letters to the editor. And yes, at the end of the day, you can vote for the lawmakers you think will do what you want.

But going to lawmakers’ homes is sick and twisted. It’s intimidating and it’s personal.

And unfortunately, it seems to be a tactic leftists are using more and more frequently. Protesters have targeted the home of acting Department of Homeland Security Secretary Chad Wolf in protests four times this summer, per ALX Now.

In 2018, Fox News’ Tucker Carlson’s home was targeted. Carlson, who wasn’t home at the time, told The Washington Post that he called his wife. “She had been in the kitchen alone getting ready to go to dinner and she heard pounding on the front door and screaming. … Someone started throwing himself against the front door and actually cracked the front door,” Carlson recounted.

Is this the America we want, where families are terrorized in their own homes?

Do we want another shooting on a baseball field? Perhaps this time the Capitol Police—who heroically shot back and saved the lives of the lawmakers and others present—won’t be there.

Activists are playing with fire right now—and it’s incumbent on liberal leaders to tell them that enough is enough, that homes are for private lives, not public protests.