1 Year Later, Lawmakers Who Were There Reflect on Ballfield Shooting and How It Changed Their Outlook 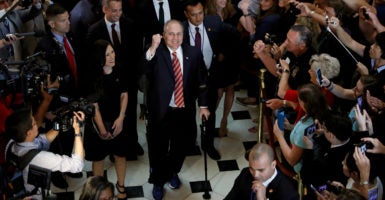 House Majority Whip Steve Scalise, accompanied by his wife Jennifer, makes his way through the Capitol on Sept. 28 for the first time since being shot and wounded the previous June 14 during a congressional baseball practice. (Photo: Kevin Lamarque/Reuters/Newscom)

“I can still taste the dirt in my mouth when I hit the ground, that parched dirt,” Rep. Mike Bishop, R-Mich., recalls.

“It’s just a sensation that you will never forget,” Bishop says in an interview with The Daily Signal. “And it was both eerily quiet and then, just wildly beyond my explanation, the loudness of those gunshots.”

Bishop and other Republican lawmakers who were present one year ago Thursday when a man opened fire during practice for a congressional baseball game say the shooting is etched in their memories.

They also say it affects how they see their public service.

“Each time they made your heart skip, ’cause you knew it was coming [your] way,” Bishop says of the gunshots. “I was still in the field at the time, and I could hear the bullets whizzing over … I saw stuff flying over the back of the dugout; you could hear it pinging off the chain-link fence.”

House Majority Whip Steve Scalise, R-La., and at least 21 other Republican members of the House and Senate were at baseball practice at an Alexandria ballpark when James T. Hodgkinson, 66, of Belleville, Illinois, began shooting at them shortly after 7 a.m. He fired about 70 rounds, authorities said at the time.

Scalise, the No. 3 House Republican, returned to Congress on Sept. 28, walking with canes after extensive surgeries and an initial recovery from the bullet that shattered his left femur and damaged his hip and pelvis.

Four others, including two Capitol Police officers, were wounded in the attack before police brought down Hodgkinson, killing him in an exchange of gunfire.

“I think it was a wake-up call to some people,” Rep. Bill Johnson, R-Ohio, tells The Daily Signal in an email.

Johnson had left the ballfield just minutes before Hodgkinson began shooting at Republican lawmakers and staff during the practice on June 14, 2017.

“People respond to what they see on the news and when they see members of Congress being divisive and going at each other, it just plays right out in our society because Congress is a microcosm that is a reflection of our own society,” Johnson says.

The lawmakers and staffers had been preparing for the annual baseball game, scheduled the following day at Nationals Park, when Republican and Democrat members of the House and Senate play against each other. (This year’s game is set for Thursday.)

Rep. Gary Palmer, R-Ala., recalls for The Daily Signal where he was standing when he heard the gunfire.

“I was probably 20 steps from the guy when he fired his first shot, and I was the first one to yell out to [Mississippi Rep.] Trent Kelly.  He was at third base, I was at shortstop … I yelled out, ‘That was a gunshot.’

“Trent said, ‘I know.’ And I turned and said, ‘There he is, get off the field,’” Palmer recalls in an interview. “Of course, you know what happened after that.”

Bishop says he was trying to make it to the one open exit from the field when Capitol Police Special Agent David Bailey, on Scalise’s security detail, made a valiant effort to cover the lawmakers. Advancing with Bailey was a colleague, Special Agent Crystal Griner.

“I decided I would rather die on my feet than on my stomach trying to get away, so I got up and ran,” Bishop recalls, “and as soon as I did that … David came running through toward the gunfire and laid down cover [fire] so the rest of us could get out.”

Griner was hit in the leg, Bishop says, and he watched the officer use her weapon to prop herself up over the hood of a car.

“I have never seen that level of courage and valor,” the Michigan Republican says. 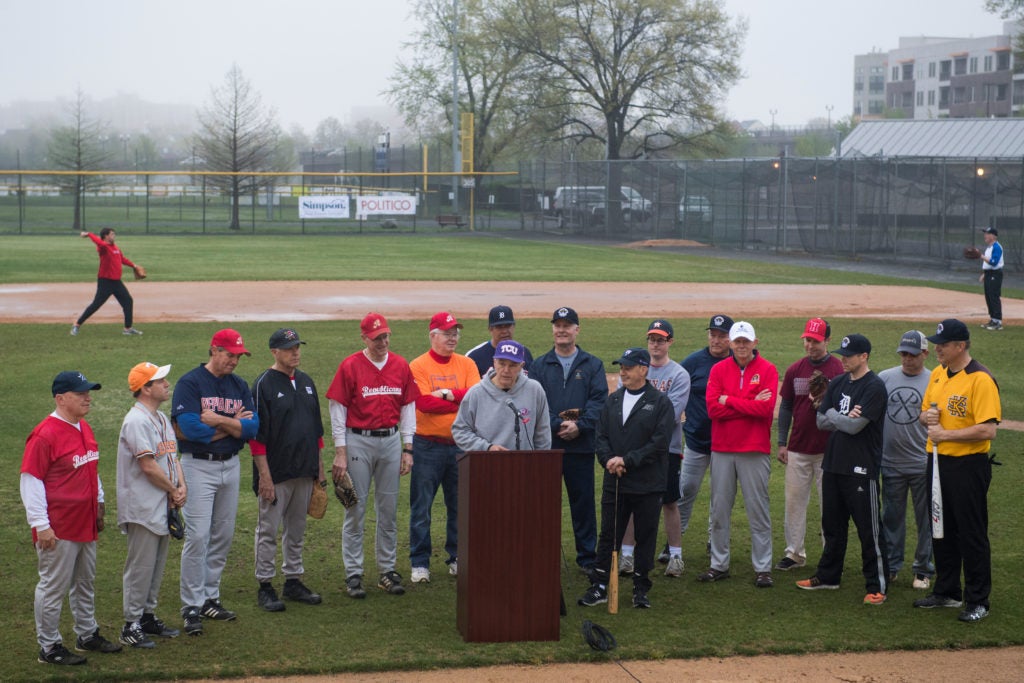 Rep. Roger Williams, R-Texas, speaks during an April 25 press conference with members of the Republican congressional baseball team after the first practice of the year at Eugene Simpson Stadium Park in Alexandria, Virginia. A Williams aide, Zack Barth, was injured in the shooting one year ago during a team practice at the ballfield. (Photo: Tom Williams/CQ Roll Call/Newscom)

Had Scalise not been at the practice with his Capitol Police security detail, the day could have ended much more tragically, Rep. Rodney Davis, R-Ill., says in an interview with The Daily Signal.

“Steve could … have had a meeting, but he was there, [and] because of that, and David and Crystal firing back, we’re all here today,” Davis says.

On July 27, 2017, President Donald Trump awarded the Presidential Medal of Valor to Bailey, who also was wounded, and to Griner, who was still walking on crutches, as well as to three Alexandria police officers who responded.

Like Johnson, Rep. Jeff Duncan, R-S.C., had departed practice early and, unbeknownst to him at the time, encountered the shooter as he was leaving with an aide and Rep. Ron DeSantis, R-Fla.

“I was running across the parking lot to my waiting vehicle. I ran into somebody that asked a question in the parking lot; turned out to be the shooter, Hodgkinson,” Duncan recalls, adding:

He said, ‘Excuse me, can you tell me who is practicing today, Republicans or Democrats?’ And I said, ‘This is the Republican team,’ and he said, ‘OK, thanks,’ and turned and ran across the parking lot.

Duncan says he believes it is a miracle that his life was spared.

“Turns out the guy had my name on an assassin’s list that he carried in his pocket; there were six of us, and my name was on there. He had my description, had my age, had my office number, had a couple other details, but I didn’t know that at the time. That came out later,” Duncan says, adding:

I truly believe it was a God thing, it was a God thing. The guy had my name on his list, he talked with me. He either had scales on his eyes or just wasn’t ready to commit an act of murder at that point in time.

“Hopefully they won’t need me a lot,” @SteveScalise tells @FoxNews of return to cong baseball a year after shooting pic.twitter.com/aTzDnCTOXO

Rep. Chuck Fleischmann, R-Tenn., tells The Daily Signal that the shooting reminded his colleagues on both sides of the aisle of the importance of their shared mission and responsibility.

Fleischmann describes the incident as “sad,” “injurious,” and “devastating.”

“Whether we are Republicans, Democrats, independents, House, Senate, and White House, judiciary, we are all there to serve the American people,” he says in an interview. “And despite our differences, which sometimes run deep, we want to try to come together and move our country forward in a very positive, very positive direction … since the shooting.”

Davis says the shooting’s immediate aftermath reminded him of the goodwill that the country still possesses, even with its vast political differences.

“To get my phone back later that evening and see the 400-plus texts and voicemails and calls, knowing that these were people that, if you look at the 24-hour news cycle, you wouldn’t expect that they would call and check on me,” Davis says. “But that is what I saw. I saw the humanity of people, regardless of whether you are Republican or Democrat.”

Duncan, the South Carolina lawmaker, says the shooting left a lasting impression on those who experienced it.

“It has been tough on the members of Congress that were there. And it has been a year now, and we still talk about it almost weekly, and have for a year,” Duncan says.

“It is kind of strange how you kind of process everything through people who were there and people that understand, people that care.”