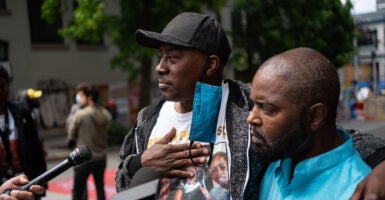 The father of a young man killed in Seattle’s Capitol Hill Organized Protest zone has filed $3 billion in claims against King County, the city of Seattle, and Washington state.

Horace Anderson filed the lawsuit Thursday over the death of his 19-year-old son, Horace Lorenzo Anderson, alleging that the local government’s “inactions” and actions created a “hazardous, and lawless situation” that resulted in his son’s death, KING 5 news reported from a statement by the law firm representing Anderson.

“It is important to hold our government leaders accountable so this will not happen again,” attorney Evan Oshan said in a statement, according to the publication. “Those in positions of power must not be allowed to hide from their duty to act responsibly and protect citizens. With power and prestige comes responsibility!”

Anderson was shot inside the outskirts of CHAZ, which was later renamed CHOP, early in the morning June 20 and carried by bystanders to Harborview Medical Center, according to KING 5. The 19-year-old died at the hospital, the publication reported.

“The thing that we really need to focus on is that there was a, an individual who lost his life unnecessarily and he, it was predictable, it was preventable, and this should have never happened,” Oshan said in an interview with KING 5.

Oshan told KING 5 that the police precinct near the zone was “given up,” and said emergency medical crews nearby did not provide aide to Lorenzo Anderson.

“What I do know is that EMS did not come in and take care of Lorenzo as he lay bleeding. This was a totally lawless situation. It puts him in great danger and it was just wrong,” Oshan said.