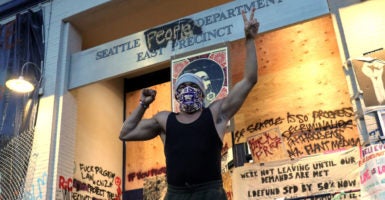 Businesses, workers, and residents sued the city of Seattle on Wednesday, saying local leadership enabled and endorsed the occupied zone at the detriment of “basic public safety.”

At least a dozen businesses filed the class-action lawsuit, which came as a result of Seattle’s Capitol Hill Organized Protest’s continued proliferation in the city.

“Rather than seeking to restore order and protect the residents and property owners within CHOP, the City instead chose to actively endorse, enable, and participate in the occupation of CHOP,” page three of the 56-page lawsuit said, courtesy of The Seattle Times.

The lawsuit added: “The City’s conduct has also resulted in the elimination of basic public safety within CHOP and nearby areas. For example, the City has enacted a policy under which police will not enter the CHOP area except during life or death emergencies, and, even in those situations, the response is at best muted and late.”

Mayor Jenny Durkan called the encampments a “peaceful expression of our communities’ collective grief” on June 11—a few days after they began.

Several shootings have occurred within CHOP amid armed vigilantes guarding the borders of the six-block Seattle street area centered around the abandoned East Police Precinct, according to Newsweek.

“The result of the City’s actions has been lawlessness,” the Calfo Eakes LLP, the firm spearheading the lawsuit, told The Seattle Times in a statement. “There is no public safety presence. Police officers will not enter the area unless it is a life-or-death situation, and even in those situations, the response is delayed and muted, if it comes at all.”

“This lawsuit does not seek to undermine CHOP participants’ message or present a counter-message,” the lawsuit said. “Rather, this lawsuit is about the constitutional and other legal rights of Plaintiffs … which have been overrun by the City of Seattle’s unprecedented decision to abandon and close off an entire city neighborhood, leaving it unchecked by the police, unserved by fire and emergency health services, and inaccessible to the public at large.”

Durkan—amid backlash and the multiple shootings—changed her assessment of the demonstrators, saying, “It’s time for people to go home” Tuesday. The Democrat also expressed interest in disbanding the occupied zone, but has not followed through on that promise at the time of the lawsuit, according to KCRA 3.