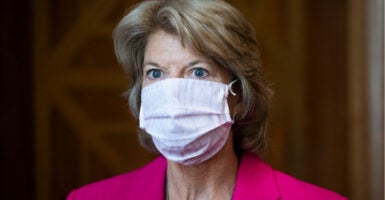 "I did not support taking up a nomination eight months before the 2016 election to fill the vacancy created by the passing of Justice [Antonin] Scalia. We are now even closer to the 2020 election — less than two months out — and I believe the same standard must apply," said Sen. Lisa Murkowski, pictured arriving at a hearing on Sept. 16. (Photo: Tom Williams/CQ-Roll Call, Inc/Getty Images)

President Donald Trump Sunday tweeted about Alaska Republican Sen. Lisa Murkowski on Sunday after she indicated that she would likely not support any Supreme Court nominee until after the election.

Trump quoted a tweet from the Alaska Chamber of Commerce promoting a future event featuring Murkowski, retweeting it and saying “No thanks!”

Murkowski commented in August on confirming a Supreme Court nominee in an election year saying, “When Republicans held off Merrick Garland in 2016 because nine months prior to the election was too close, we needed to let the people decide,” according to The Hill.

“And I agreed to do that. If we say now that months prior to the election is OK when nine months is not, that is a double standard and I don’t believe we should do that,” she added.

A vacancy on the Supreme Court opened Friday evening when Justice Ruth Bader Ginsburg passed away from pancreatic cancer at the age of 87.

Murkowski reiterated her stance Friday afternoon only hours before Ginsburg’s death, saying that “fair is fair.”

Trump said, “I think the people of Alaska will never forgive her for what she did,” after she did not vote for Justice Brett Kavanaugh in 2018.

Editor’s note: In a statement to Washington Post’s Seung Min Kim, Murkowski said, “For weeks, I have stated that I would not support taking up a potential Supreme Court vacancy this close to the election. Sadly, what was then a hypothetical is now our reality, but my position has not changed. I did not support taking up a nomination eight months before the 2016 election to fill the vacancy created by the passing of Justice [Antonin] Scalia. We are now even closer to the 2020 election — less than two months out — and I believe the same standard must apply.”