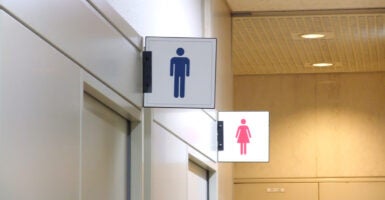 The Gloucester County School Board in Virginia adopted a policy declaring that “use of said [restroom and locker room] facilities shall be limited to the corresponding biological genders.” (Photo: laymul/Getty Images)

A high school student who identifies as transgender, who sued the school over which restrooms to use, is continuing to pursue the litigation even three years after graduating. To its credit, the Gloucester County School Board in Virginia has continued to defend itself.

Gavin Grimm is a biological female who announced prior to sophomore year the intention to identify as male. The school accommodated Grimm by offering the use of the faculty or nurse’s office restrooms, but after a few weeks Grimm complained that this was “stigmatizing.”

The principal then permitted Grimm to use the boys’ restrooms, but parents who heard of the arrangement began complaining to school administrators.

The school board then adopted a policy declaring that “use of said [restroom and locker room] facilities shall be limited to the corresponding biological genders.”

Although the school also provided additional unisex, single-user restrooms, available to Grimm or any other student, Grimm sued, charging a violation of Title IX—the 1972 law prohibiting discrimination based on “sex” in education.

In the first round of litigation, the U.S. Court of Appeals for the 4th Circuit ruled in Grimm’s favor by saying it must defer to the Department of Education’s interpretation of Title IX—which, under the Obama administration’s guidance, said that Title IX prohibited discrimination based on “gender identity,” as well as “biological sex.”

The Supreme Court accepted an appeal of that ruling, but when the Trump administration rescinded the Obama guidance, it sent the case back to the lower courts. Without the Obama policy to hide behind, a three-judge panel of the 4th Circuit declared on its own that the school had violated Title IX and the equal protection clause of the Constitution.

(In addition to its implications for schools, the case illustrates the importance of judicial appointments. The majority consisted of two Obama judges, Henry F. Floyd and James A. Wynn Jr., while a convincing dissent was written by Judge Paul V. Niemeyer—an appointee of former President George H. W. Bush.)

Last week, the school board appealed for review of the case by the full 4th Circuit. Since the case has already been to the Supreme Court once, it would not be surprising if it ends up there again.

Hopefully, the full Circuit Court and the Supreme Court will find that separate shower, locker room, restroom, and housing facilities for the sexes—long permitted under Title IX and its regulations—can continue to be implemented on the basis of biological sex, which is the basis for the separation in the first place.