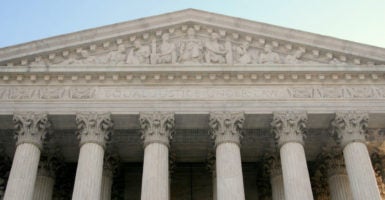 The Supreme Court refused to hear arguments in Gloucester County School Board v. G.G., sending the case back to the 4th U.S. Circuit Court of Appeals. (Photo: iStock Photos)

For the past few months, the legal community has been preparing for a grand showdown before the Supreme Court on student privacy rights.

The central question at hand: Must schools allow a student into sleeping facilities, locker rooms, and restrooms reserved for the opposite sex if that student subjectively identifies with that sex?

The prospects for that face-off, in the case of Gloucester County School Board v. G.G., grew dim a few weeks ago when the Trump administration rescinded an Obama-era directive that lay at the heart of that case.

The directive would have required the Gloucester County School Board in Virginia to allow Gavin Grimm, a female student who identifies as a male, to use the boys’ restroom. The Trump administration’s withdrawal of that Obama-era directive fundamentally altered the nature of the case.

As a result, earlier this week, the Supreme Court did what many expected and sent the Gloucester case back to the court of appeals. That move not only tees up the case for a ruling by the 4th U.S. Circuit Court of Appeals, it also kick-starts many similar cases that had been put on hold.

Those cases all revolve around one central issue. Gender identity advocates insist that the term “sex” in Title IX of the Education Amendments of 1972—a statute that prohibits public schools from discriminating “on the basis of sex”—includes the altogether distinct notion of “gender identity.”

This argument is a stretch. Sex, after all, is fundamentally different from gender identity.

Sex is rooted in biological reality determined at birth by objective criteria like anatomy and chromosomes. But gender identity is based on subjective perceptions—the idea that a person’s status as male, female, or something in between depends on what he thinks about himself.

And nothing in Title IX’s congressional history or its regulations suggests that Congress had gender identity in mind when it used the word “sex.”

Nor is there any support in Title IX for the novel idea that federal law requires boys who identify as girls to share sleeping facilities, locker rooms, and restrooms with girls.

On the contrary, for over four decades Title IX and its regulations have explicitly said that schools may implement sex-specific access policies for these sorts of private facilities. Ironically, gender identity advocates are taking a law intended to equalize educational opportunities for women and distorting it to deny them opportunities. Young girls who don’t want to share locker rooms with male students are now forced into uncomfortable school settings day in and day out, and female athletes are being required to compete against boys who identify as girls.

These developments mark a sad regression, not an advancement, in women’s rights.

By doing so, President Barack Obama tilted the scales of the debate. Various legal doctrines like Chevron and Auer deference require courts to give special respect to the executive branch’s interpretation of the laws that it is charged with implementing.

With the Trump administration’s actions on Feb. 22, the executive’s thumb has now been lifted off the scale.

The Justice Department recognized that the Obama-era directives did not “contain extensive legal analysis,” “explain how the[ir] position is consistent with the express language of Title IX,” or give “due regard for the primary role of the States and local school districts in establishing educational policy.”

For these reasons, President Donald Trump did away with the Obama administration’s dictates.

Although gender identity advocates have lost the tremendous advantage of having the executive branch champion their cause, they will undoubtedly continue to press their position in court. And the Supreme Court’s decision not to rule in the Gloucester case reignites many cases that will give them occasion to do just that.

Students concerned about their privacy rights have filed a number of these cases—one in Illinois and another in Minnesota. They attend public schools that allow classmates of the opposite sex to share their locker rooms and restrooms, and they object to this violation of their dignity and privacy.

These cases will soon resume, and within no time, many more courts will decide whether federal law forces schools to allow boys who identify as girls to share locker rooms with female students.

Once those courts rule, advocates will again ask the Supreme Court to settle the issue once and for all. Should the court agree to do that, we’ll find ourselves exactly where we were just a few days ago.