Under Jihadi Siege, Christians in West Africa Are Praying for a Miracle 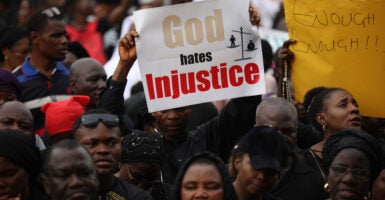 Christians march in the streets of Abuja, Nigeria, on March 1 for peace and security. Catholic bishops in Nigeria organized Catholics and other Christians to pray for security and to denounce the killings of Christians by Islamist Boko Haram insurgents. (Photo: Kola Sulaimon/Agence France-Presse/Getty Images)

“One evening in late June, gunmen stormed a village in northern Burkina Faso,” the The Washington Post reported, “and ordered people who had been chatting outside to lie down. Then the armed strangers checked everyone’s necks, searching for jewelry. They found four men wearing crucifixes—Christians. They executed them … .”

Burkina Faso is one of several vulnerable African nations that are frequently targeted for terrorism and Christian persecution.

Along with Nigeria—where reportedly more than 1,200 Christians were killed by jihadists in the first six months of 2020—the “Group of Five” in sub-Saharan West Africa deserves attention. They are Burkina Faso, Chad, Mali, Mauritania, and Niger.

These far-flung countries are facing alarming circumstances that rarely make their way into our American news cycle—especially in an election year.

Sectarian bloodshed in Nigeria is occasionally headlined in U.S. news reports, and I’ve written a lengthy report for the Family Research Council about the escalating terrorist attacks on Christian victims there.

Nigeria’s plight is chilling, and now similar dangers are increasing exponentially in several other nearby nations—threats that are too often overlooked. Only recently has Burkina Faso gained international attention.

On Aug. 30, Premier Christian News reported, “Churches across the north of Burkina Faso are being left deserted as Christians flee escalating violence from armed Jihadist groups.”

More than 1 million people are now displaced in the West African nation in what the U.N. Refugee Agency has said is now ‘the world’s fastest-growing humanitarian and protection crisis.’

Although the violence does not affect Christians exclusively, there is no doubt that they are specifically targeted.

In related news, according to the United Nations High Commissioner for Refugees, in Burkina Faso, “Five percent of the country’s entire population—an astonishing one in 20 people—is now displaced in the world’s fastest-growing humanitarian and protection crisis.”

These terrorist groups are expanding in alarming numbers. Some African countries have agreed to host foreign fighters to train and defend local military and law enforcement units. But due to the present drawdown of American troops in the region, there is little likelihood of the U.S. being involved.

The American Enterprise Institute’s Katherine Zimmerman writes, “West Africa is where the steepest drawdowns will probably occur. Already resource-constrained, AFRICOM reported it had downgraded its counterterrorism mission there.”

Despite the fact that regional security and stability have deteriorated rapidly over the past year, its new goal is only to contain the groups instead of degrading their ability to operate and stage terror attacks. West Africa is the only region where both al-Qaida and the Islamic State are expanding, coordinating, and getting deadlier.

Allowing these groups to fester by further reducing resources could be costlier in the long run as they could begin to export their terror attacks—and thus require a more aggressive intervention.

According to an August 2020 Pulitzer Center report, a U.S. counterterrorism effort is ongoing in northwest Africa, but only in the form of an annual training exercise, conducted by Special Operations Command Africa, focused on enhancing the capability of nations in West Africa to plan and conduct counterterrorism missions. This involves 11 nations: Algeria, Burkina Faso, Cameroon, Chad, Mali, Mauritania, Morocco, Niger, Nigeria, Senegal, and Tunisia.

At first that little news item might sound like a godsend to beleaguered African Christians. But the warriors involved will not be engaged in day-to-day protection or defense of terrorist targets. Thus, the vast majority of jihadi victims will remain utterly defenseless.

Innumerable stories recount desperate calls for police or military assistance by beleaguered villagers—cries for help that result in at best an hourlong delay of deployed forces or, all too often, no response at all. A bloodbath inevitably takes place instead.

I asked my colleague Nina Shea, director of the Hudson Institute’s Center for Religious Freedom, for her perspective on this seemingly intractable situation.

“From Mozambique on Africa’s East Coast to Nigeria, Niger, Mali, and Burkina Faso in West Africa, the region is under jihadi attack,” she explained.

In fact, in recent years, Nigeria alone has seen more Christian martyrs than all the Middle East combined.

Shea went on to say, “ISIS and al-Qaeda are both gaining force in West Africa and aim to establish a new caliphate that will eventually threaten us in the West, too. It is in U.S. interests [to] not be complacent. African Christians need our prayers, our humanitarian engagement, and our churches’ and government’s aid to face this crisis.”

For those of us watching from afar, the situation in West Africa is both tragic and infuriating. It is doubtful whether anytime soon U.S. or other foreign forces will be engaged in assisting beleaguered Christians there. Yet, like the faithful believers who persistently call out for help, we need to stand alongside them in their appeals for divine intervention.

Truthfully, any good news about West African Christians’ struggle against terrorist groups would be an enormously welcome answer to prayer. At this point, we might even call it a miracle.