Some Schools Don’t Want You to Know What They Are Teaching Your Kids. That’s a Problem. 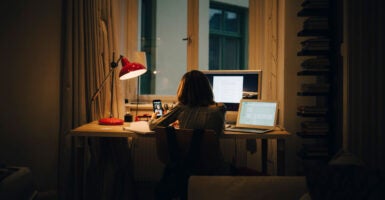 Parents need to be vigilant about the content that their children are learning through school. During the age of distance learning, many parents are discouraged by school officials from staying aware of curriculum material. (Photo: Maskot/Getty Images)

Six months into the pandemic, some traditions will still not be upset by a virus. As approximately half of K-12 schools are only offering online instruction, parents will still know little, if anything, of what their children are being taught in school except by accident—or  unless they ask.

Recent fallout from such asymmetric information comes from Wylie, Texas, where a cartoon associating police with the KKK went from classroom to living room to the press room and on to the governor.

At Cooper Junior High, eighth-grade students were assigned to write about a political cartoon that depicts slave owners, then KKK members, and then police in corresponding panels. Furious parents, who only learned of the assignment because their children told them, contacted the school and wrote angry statements on social media.

Last week, Gov. Greg Abbott said the teacher responsible for the assignment should be fired.

To be sure, there have always been disagreements about the content that students are taught in the classroom. From the introduction of “new math” and alternative ways of teaching reading in the 1950s and ’60s, to the arrival of Common Core textbooks over the last decade, changes in school curriculum always sparks debate, and will continue to do so long as schools enroll more than one student.

But in a period that historians will mark less for its civil discourse than for the birth of cancel culture and vicious riots, parents should be wary of projects that want to reframe history or train children to see injustice all around them.

For example, the New York Times Magazine and Pulitzer Center’s 1619 Project includes a school curriculum that would change how U.S. history is taught, marking 1619, the year slaves arrived in the Virginia colony, as “our nation’s foundational date.”

Reviewers, including decorated historians, have found multiple errors within the 1619 Project, starting with the date: slaves arrived via Spanish ships in North America a century before 1619. And despite the project’s claim, American colonists did not use the preservation of slavery as the primary reason to fight the American Revolution.

Noted academics including Gordon Wood, James McPherson, Allen Guelzo, and Sean Wilentz, to name a few, have catalogued the errors.

Meanwhile, Black Lives Matter also has a school curriculum, if one can call a list of  progressive policy demands the basis for a course of study. Considering that instructions for hosting a week of action precedes the list of actual learning materials, it’s no surprise to find politically charged titles as “Open Secrets in First Grade Math: Teaching about White Supremacy on American Currency” on the list.

This material goes beyond teaching students the dangers of racism and ventures well into the misuse of journalistic license and a philosophy of perpetual victimization.

What can be done? For parents, pandemic pods are all the rage right now, in which a small group of parents pool their resources to hire private instructors for their children.

But for generations, isolated groups parents have gathered to educate themselves on what their children are learning and become active with their school board. Today we might call these “textbook pods,” but “concerned citizens” will do. For all parents now, the pandemic offers a unique opportunity to review what your child is learning while content is being delivered online for all or part of the school week.

This may sound simple, but there are startling examples of schools attempting to prevent parents from finding out what is being taught. For example, in Rutherford County, Tennessee, school officials asked parents to sign forms stating they would not watch their child’s online classes while the district remains closed for in-person learning. The district released different guidance, but only after parents complained and the policy made headlines.

State and local policymakers should help parents’ efforts by requiring that public schools provide descriptions of their curricular materials online and make copies of assigned reading or written tasks available upon request.

Goldwater Institute research explains that Arizona, Texas, and Tennessee lawmakers have already enacted provisions that allow parents to see instructional content before it is taught to students, though even some of these provisions come with caveats (and considering the incident in Rutherford County, state legislators should make sure districts follow through).

In Arizona, for example, parents only view the content on school grounds. State lawmakers should require that districts bear the responsibility for providing instructional content to parents either in physical form or online.

Finally, state and federal lawmakers should affirm a parent’s right to choose how and where their child learns. Parent choice in education became a reality for everyone this year when nearly every school in the world closed due to the pandemic, and then only certain schools re-opened for in-person learning in time for the current school year.

Again, it may seem commonsensical to say that parents should be allowed to make choices about their child’s education, but some state and local policymakers have tried to stop parents from moving their child out of an assigned school.

Lawmakers must maintain a consistent message that parents should be allowed to know what their children are taught, and can choose how and where their children learn.

For federal lawmakers, delivering this message without expanding the federal footprint will take legislative restraint. But such a visible show of support for parents trying to find a quality education for their child would be a welcome one, and would restore a vital tradition for everyone involved in K-12 schools: The pursuit of truth.