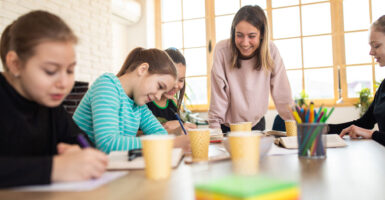 Pandemic pods are rapidly growing in popularity. In this arrangement, a small group of families will pool their resources to hire an instructor to teach a small group of students, or “pod.” (Photo: Miodrag Ignjatovic/Getty Images)

The practice of organizing “pandemic pods,” in which parents team up with other families in their neighborhoods or social circles to hire teachers for their children, is getting more and more popular by the minute.

With many school districts around the country planning not to reopen classrooms this fall—or, at best, planning to offer some combination of virtual and in-class instruction—families are clamoring to secure education consistency for their children as the school year quickly approaches.

Families work together to recruit teachers that they pay out-of-pocket to teach small groups—“pods”—of children. It’s a way for clusters of students to receive professional instruction for several hours each day.

Some parents are using their pod arrangements to hire teachers who will supplement the online classes being provided by their school districts.

As Laura Meckler and Hannah Natanson of The Washington Post observe, pandemic pods are “a 2020 version of the one-room schoolhouse, privately funded.”

In the case of one northern Virginia family that Meckler and Natanson profiled, the parents pay around $500 per month to get in on an arrangement with other families in their neighborhood to share a teacher they are hiring for their pod of children.

As one mother named J Li wrote in a viral Facebook post last week, thousands of parents are “scrambling” to form pods through “an absolute explosion of Facebook groups, matchups, spreadsheets, etc.”

J Li describes the pod phenomenon as “clusters of three to six families with similar aged (and sometimes same-school) children co-quarantined with each other, who hire one tutor for in-person support for their kids.” The tutor may serve as a full-time teacher for the pod of students, or may only teach on a part-time basis or outdoor classes.

“Suddenly teachers who are able to co-quarantine with a pod are in incredible demand,” J Li said.

One pod tutor interview by Meckler and Natanson, Christy Kian from Broward County, Florida, formerly a private-school teacher, said she will earn more this year teaching two families (with four total children) than she did in her prior teaching position.

She said as soon as she had set up the arrangement with those two families, she was immediately contacted by five others.

As noted by J Li:

This is maybe the fastest and most intense, purely grassroots [sic], economic hard pivot I’ve seen, including the rise of the masking industry a few months ago. Startups have nothing compared to thousands of moms on Facebook trying to arrange for their kids’ education in a crisis with zero school-district support.

I swear that in a decade they are going to study this… trends that would typically take months or years to form are developing on the literal scale of hours.

The pods approach is analogous to microschooling, which only recently, through providers like Prenda, had started to take root. Similar to homeschooling co-ops, microschools allow small groups of students to work together in flexible learning environments alongside older and younger students, sharing resources and teachers.

The pandemic pod is catapulting microschooling to the forefront of education provision during quarantine. As Meckler and Natanson write:

Alexandra Marshak, who lives in Manhattan with her husband and two young sons, is exploring a learning pod with three other families. The original idea was that parents would take turns teaching, rotating hosting duties. But then one parent suggested they rent a studio apartment for the venture. They are also now considering hiring a professional to do the teaching. Marshak, who is out of work, said she’s concerned about spiraling costs. But at this point, she said, ‘Everything is on the table.’

Podding is also similar to the “cottage school” concept. As the hosts of CottageSchoolLife.com explain,

Our cottage school is made up of four families with 16 kids between us all! We meet once a week for about 24 weeks of the school year to learn together.

One aspect that makes a cottage school different from other homeschool co-ops is its size. It’s purposefully small—cottage-like! It allows us to have encouragement and support from each other as we teach our kids.

Paradoxically, the teachers unions may be enabling this free-market, parent-driven reform of K-12 education to unfold.

The Los Angeles teachers unions, for example, released a list of demands last week that they want to see fulfilled before blessing the school reopening of the Los Angeles Unified School District, the second-largest school district in the country. Those demands included everything from raising taxes and “Medicare for All” to eliminating charter schools and defunding the police.

While union policy demands are leading district schools to remain closed, podding is reinforcing the old adage that the market finds a way.

Understandably, equity and access concerns have arisen as quickly as podding itself.

For parents who cannot afford to pay out of pocket to contribute to a neighborhood pod, providing resources through education savings accounts will be a crucial support moving forward.

Several states across the country have provided, or are considering providing, emergency education savings accounts to families, allowing them to take a portion of their child’s public education funds to private tutoring or online options of choice. Freeing up those dollars is the policy reform needed to make access to pods, microschools, and cottage classes in reach for all families.

It’s time for policy to catch up with families.