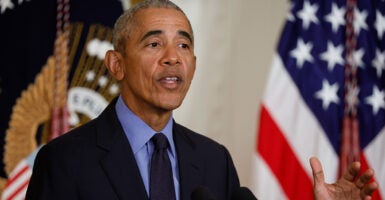 President Barack Obama, pictured here speaking at an event on April 5 at the White House in Washington, D.C., fought against school choice in his time in office—while sending his daughters to an elite private school. (Photo: Chip Somodevilla/Getty Images)

That year, according to Table 236.75 published by the National Center for Education Statistics, the public elementary and secondary schools in our nation’s capital spent a total of $29,925 per pupil.

None of the 50 states came close to that.

This month, the National Center for Education Statistics published a new report on the revenues and expenditures of public elementary and secondary schools in the 2019-2020 school year. This report, however, did not specifically present the total per pupil spending for public schools in each of the states and the District of Columbia.

Thus, a year at the University of Nebraska (not counting room and board) would cost an out-of-state student less than a year in a D.C. public school costs taxpayers.

Are these public schools worth it? Not according to the National Assessment of Educational Progress tests.

In 2019, eighth graders in D.C. public schools scored an average of 250 out of 500 on the National Assessment of Educational Progress reading test. That was lower than the average score for eighth graders in any of the 50 states.

Only 23% of D.C. public school eighth graders scored at a level rated proficient or better in this reading test.

As in reading, only 23% of D.C. public school eighth graders rated proficient or better in math.

“The purpose of the program,” explains a Congressional Research Service report, “is to provide low-income parents residing in DC, particularly those with a child attending an elementary or secondary school that has been identified as one of the lowest-performing schools under DC’s accountability system, with ‘expanded options’ for enrolling their child in other DC schools.”

“For the purposes of the DC OSP,” says the report, “an ‘eligible student’ is a student who is a DC resident and comes from a household that is receiving assistance under the Supplemental Nutrition Assistance Program (SNAP) or whose income does not exceed either (1) 185% of the poverty line, or (2) for a household with a child participating in the DC OSP in the preceding year or under the DC School Choice Initiative Act while it was still in effect, 300% of the poverty line.”

With these restrictions on participation there are currently only 1,852 students enrolled in private schools using scholarships from the program, according to the program’s website.

And they do not get anywhere near the amount that the D.C. public schools spend per pupil.

Former President Barack Obama, who tried to end the D.C. school choice program, did not send his daughters to D.C. public schools. He sent them to Sidwell Friends, a private school that currently lists its tuition for pre-kindergarten through second grade at $47,200.

Congress should not merely preserve the D.C. school choice program, it should expand it. It should enact legislation directing that every parent of a school-age child in the nation’s capital be given a voucher equal to the total amount that the D.C. public schools spend per pupil. The parents should be given the power to redeem that voucher at any school they wish—public or private.

Primary and secondary education for children from Washington, D.C., would then become a model for the nation—rather than sitting at the bottom of the nation.