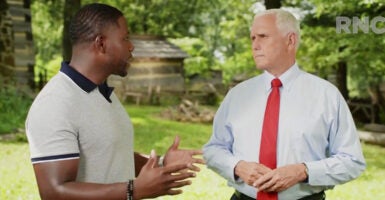 Trump couldn’t have done it without the help of senators such as Sen. Thom Tillis, R-N.C., he told the local crowd.

“This rising generation is the pro-life generation,” Pence said of young Americans.

“This generation is going to reclaim the principle that every life matters,” he added.

The event was part of the “Life Wins 2020 Tour” sponsored by Susan B. Anthony List, a leading pro-life organization.

Some pro-life leaders say Trump, who early this year became the first president to speak in person at the annual March for Life in Washington, is the most pro-life president in American history.

When she came to the stage at 1:18 p.m. to introduce Pence, SBA List President Marjorie Dannenfelser joked that she was a “plagiarist” because she borrowed the main title of her new book “Life is Winning: Inside the Fight for Unborn Children and Their Mothers” from him.

The event, with an interview format, was dubbed a “fireside chat” with the vice president.

>>> Podcast: How Life Is Winning in 21st Century

Dannenfelser recalled that she and then-GOP pollster Kellyanne Conway strongly urged Pence, then a congressman representing Indiana, to run for president in 2012.

He instead opted to run, successfully, for governor of Indiana. Conway became a top aide to Trump after managing the final stretch of his 2016 campaign for president.

Dannenfelser credited the Trump administration with “transforming the federal courts,” adding that “without that, there would be no laws to save lives.”

She praised Pence for casting the tie-breaking vote in the Senate last year on a bill allowing states to defund Planned Parenthood.

When he was young, Pence noted, he was a “Democrat youth leader.”

But he “came of age in college” with his “second-favorite president,” Republican Ronald Reagan, the vice president said, in part because Reagan was pro-life.

During a discussion of the abortion policies of the Democratic governors of North Carolina, New York, and Virginia, Pence expressed disbelief that “the governor of Virginia openly defended infanticide on a radio show.”

The vice president was referring to a controversial answer given by Virginia Gov. Ralph Northam in a live interview last year.

Pence recalled speaking with Abby Johnson, a former Planned Parenthood clinic director turned pro-life activist who spoke during the “virtual” convention and whose story is told in the 2019 movie “Unplanned.”

About 200 attendees gathered in the large church, an overwhelming majority of them wearing masks. Copies of Dannenfelser’s book, for which Pence wrote an introduction, were arranged outside the sanctuary.

>>> Book Excerpt: Looking Back: What I Learned at the Kavanaugh Confirmation

Supporters and opponents of Trump and Pence showed up outside the church.

The Daily Signal traveled to North Carolina with Pence aboard Air Force Two.

About 50 protesters gathered across the street, many holding signs that included obscenities. Some chanted an obscene reference to police.

Most of the signs pertained to abortion, with the cleaner ones bearing messages such as “Death Cult,” “Traitor Burn in Hell,” and “Not a Baby Machine.”

Inside, Pence spent about 15 minutes hearing personal stories from two recipients of the center’s services.

He also met with representatives including Melinda Delahoyde, president of Gateway Women’s Care, and Wendy Bonano, executive director of the center, as well as Billy Valentine, vice president of public policy for SBA List.

Ayana Williams, a 21-year-old expectant mother, said she didn’t have family in North Carolina and that Gateway had suggested a support group called Embrace Grace.

“Life is winning in America,” Pence, sitting near Delahoyde, said.

That trend is largely because of the “compassion of places like Gateway Women’s Care,” the vice president said.

“More young people are embracing a culture of life,” he said, sounding one of his themes that day.

Delahoyde said the pregnancy center in Raleigh focuses on “how can we make a difference for women in our community [and] how can we show compassion.”

She said the center aims to reach women experiencing a crisis pregnancy, often online; serve women on-site; and equip women with public health resources from partners such as Wake County and the city of Durham.

Taryn Roseboro, another recipient of the clinic’s services, said she initially had planned to get an abortion in 2015.

Then, at Gateway, she saw an ultrasound image of her unborn  son.

“Melinda told me, ‘You are amazing. You can do anything,’” Roseboro recalled, referring to Delahoyde.

“I bet he’s a handful,” the vice president said.