What’s at Stake as Judge Pauses Law on Transgender Sports 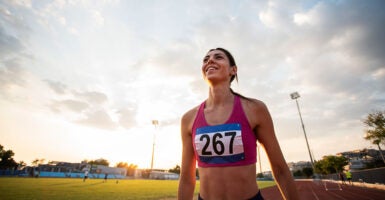 The Fairness in Women’s Sports Act would ensure that female athletes would not have to compete with male athletes who identify as women. The phenomenon of transgender athletes competing in—and dominating—female sports has disadvantaged female athletes across the country. (Photo: Vesnaandjic/Getty Images)

A federal judge has temporarily blocked an Idaho law that essentially says biological males and females must compete separately in school-sponsored athletics. His action boosts an alarming new trend in sports that puts biological women at a disadvantage in high school and college sports.

Judge David Nye on Aug. 17 granted a motion for a preliminary injunction to halt the Fairness in Women’s Sports Act—which Gov. Brad Little, a Republican, signed in March—from taking effect.

This means that for now, Idaho may not ban biological males who identify as transgender from playing on girls or women’s sports teams with biological females.

While this is only a preliminary ruling in a lawsuit that’s far from over, it’s frustrating to see a law that Idaho legislators and constituents overwhelmingly supported placed on hold. It is also important to note that transgender women competing with biological women is hardly consistent with Title IX, the federal civil rights law that forbids discrimination based on sex in education programs.

Title IX also has helped ensure equality in the funding of women’s sports in schools and colleges.

As the transgender phenomenon has continued to grow, transgender athletes—in particular biological males who “identify” as females—have begun to compete in high school and collegiate sports, often easily besting females who previously dominated their peers in competition.

That’s why Idaho’s law was so important. The law—which passed without fanfare—simply underscored Title IX and specifically addressed the infiltration of transgender females in sports.

The law became controversial when a transgender female, with the help of the American Civil Liberties Union, sued the state. The transgender athlete argues that athletes who simply identify as female should be able to compete against biological females, and any law that prevents this is discriminatory.

Thankfully, the same day that Nye paused enforcement of Idaho’s law, he also allowed two female athletes to intervene in defense of the law.

The two collegiate athletes, Madison Kenyon and Mary Kate Marshall, run track and cross-country at Idaho State University in Pocatello. They’ve been training for years and were successful among their peers. Key word: were.

In a phone interview, Christiana Holcomb, a lawyer at Alliance Defending Freedom who represents Kenyon and Marshall, said the women have faced this new kind of discrimination and unfairness firsthand.

“Our two clients have both competed and lost against male athletes,” Holcomb said.

As far as the judge’s decision to pause enforcement of the law, Holcomb remains cautiously optimistic about their case.

“We are certainly disappointed to see the judge post an injunction because it will affect women’s sports,” she said. “We think it’s bad news. But this is a very preliminary ruling. A very preliminary ruling at the beginning of the case. We are prepared to make the case as to why Idaho’s law is a good law and is consistent under Title IX.”

Idaho’s law is not only consistent with Title IX, but passed easily in the Legislature, meaning it is likely supported by the majority of the state’s voters. This is not some kind of rogue executive order issued by the governor’s fiat.

Originally a nominee of President Barack Obama in 2016, Nye was renominated by President Donald Trump, confirmed by the Senate, and took the bench in July 2017.

Although Nye obviously thought it best to pause the law while the lawsuit proceeds, it doesn’t help female athletes in the meantime who simply want—and deserve—a fair competition, particularly in an arena where national recognition, college scholarships, and other placements are at stake.

Although they’re accomplished athletes in their own right, Kenyon and Marshall both have lost track and cross-country events to transgender females. No matter how hard they train, how many hours they run, or what coaches they have, their bodies are no match for a biological male running against them.

Fairness in women’s sports shouldn’t require a law because it seems so obvious. It shouldn’t even be a conservative talking point because it’s bipartisan. Yet, it seems to be mostly conservatives who are taking up the challenge of supporting this commonsense law.

All fair-minded Americans should hope to see Idaho’s Fairness in Women’s Sports Act upheld in court so that amazing athletes such as Kenyon and Marshall may be allowed to compete on a level playing field.