Amid Unrest, How Americans Can Have an Honest Dialogue 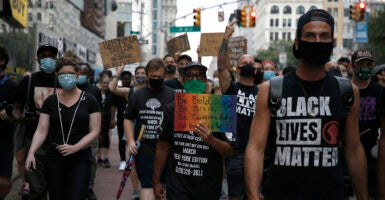 American society is experiencing unprecedented social upheaval and division along the lines of race, religion, class, and political affiliation.

We hear a cacophony of voices, advocating for or against different types of speech and action, allegedly speaking on behalf of white Americans who seem focused on vehemently proving that they are not racist by demonstrating blind solidarity with the slogan “Black Lives Matter.”

However, for many white (and nonwhite) Americans who feel sympathetic to the black community and who want to help prevent police brutality and corruption (a common aim among people of all races)—and support civil rights and social justice more broadly—doing so under the auspices of Black Lives Matter poses some significant moral conflict.

Furthermore, the calls for social justice have, in many cases, involved other forms of nonpeaceful protest, including the desecration and removal of federal monuments and symbols. In more serious and tragic instances, protests have resulted in the careless loss of human life.

There has also been a resurgence of calls for kneeling or otherwise protesting during the national anthem and other patriotic displays by athletes and attendants at sporting events or other entertainment venues.

To many in America, especially those who may have close friends or relatives who have served in the military and died protecting our country, this form of protest is an utter repudiation of the values for which our uniformed defenders fought and died. They gave the most sacred thing one could give, their own life, to ensure that we continue to have what many others in the world covet: freedom, justice, and equality.

To have such iconic symbols sacrificed on the alleged altar of political correctness seems to be a step too far for some who would otherwise be supportive of the Black Lives Matter movement.

So, how can white Americans empathize with the current Black Lives Matter and social justice movements and, at the same time, feel comfortable enough to stand up for the very symbols of sacrifice for freedom and equality that, in the eyes of many, make such a cause even achievable?

We need an honest dialogue between people of different backgrounds with the end goal of arriving at mutually beneficial solutions to the current crises facing America.

Of course, in keeping with the character ethic espoused by Stephen Covey in “7 Habits of Highly Effective People,” it is better to understand others before seeking to be understood. However, both listening and speaking are part of the process of getting to a win-win situation, which, in the end, is what we all seek.

Along with calls for white Americans to either vocally align themselves with the term “Black Lives Matter” or be deemed racist for remaining silent, we are also seeing a frightening increase in calls to implement drastic policing reforms such as disbanding of police forces in major cities. In some cities, local governments are considering “defunding” the police and redirecting taxpayer resources to other social and economic priorities.

How is it possible for white and black taxpayers, homeowners, and business owners in those communities who rely on a police presence to maintain order and protect life and property—especially in the context of recent riots and looting—to be expected to participate in a conversation about police and justice reform without throwing out the baby with the bathwater?

How do we successfully frame the conversation in the context of social justice to empower and reform our police force when we have, unfortunately, proven that we are willing to allow a few bad apples to corrupt the entire perception of those put here to protect and serve the citizens of this great country?

How do we frame this question and approach it with pure intent when we have already demonstrated an irrational decision to cut funding to the very institution that holds some level of accountability to values and laws that have defined America and made her the greatest country in the world?

As a practical matter, embodying actual virtues—compassion, honesty, prudence, temperance, courage, modesty—in our public and private lives is a significant contrast and counterpoint to the shrill virtue-signaling that has become all the rage amongst “woke” Americans. If we are consistent in these practices rather than remaining “woke,” then we can win the hearts and minds of our fellow citizens, irrespective of race, religion, or creed.

In the end, revisiting some of America’s core values will prove to be the better course of action.