The Problem With ‘Pick a Knee’ 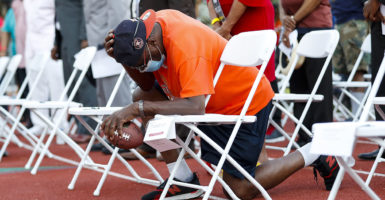 “Pick a knee,” says CNN’s S. E. Cupp, “The one that knelt on a neck or the one that knelt to try to prevent it.” This kind of ugly false choice—either you adopt my favored form of political protest or you support murder!—is meant to bully you into participating in groupthink.

Worse, it’s meant to shame the target of Cupp’s exhortation into taking ownership of racism, an evil that may have nothing to do with him.

I find the abuse of black civilians—or, though this is apparently a provocation, any civilians—by the police abhorrent. More than any other group in American life, cops, empowered by the state to use force, have a special responsibility to protect life and adhere to the law.

But I am no more liable for the actions of Derek Chauvin than is S. E. Cupp or Al Sharpton. I have nothing to confess. The color of my skin is not an indictment of my morality, nor does it strip me of my agency.

If senators want to kneel for nine minutes as an act of contrition, that’s their choice. It is my choice to be embarrassed for them. There is a yawning difference between having a desire to fix the wrongs of the past and taking responsibility for them.

Kneeling in front of your fellow citizens in cult-like displays of self-flagellation, the kind we saw in Bethesda and North Carolina, where white people begged for absolution while washing the feet of their black neighbors, is antithetical to the egalitarian ideals we should be striving to achieve.

Most Americans have historical grievances, or we wouldn’t be here in the first place. My ancestors were probably boiling leather to survive under Russian monarchs—their progeny sent to death camps under fascism and their children forced to live under the tedious tyranny of communism. They came here to stop kneeling.

It’s true that immigrants also have an obligation to assume the legacy and historical responsibilities of their new country. They do so by swearing to uphold the ideals of the Constitution.

Why would we demand that anyone answer for the legacy of Jefferson Davis or the 17th-century slave-trader when we can ask them to celebrate the legacy of John Adams, Abraham Lincoln, and the Union private fighting in Antietam to fix the mistakes of the Founders? (Then again, even if you’re a direct descendant of Gen. Robert E. Lee, you only need beg forgiveness for your own sins.)

If you have policy ideas that will make life better in African American communities that have been left behind in this country, let’s talk about it.

We can do all of that without condemning our country as fundamentally unjust.

Protest in any peaceful way you like, but some of us see no reason to disrespect the flag, either. Though it’s now largely memory-holed, the original reason Colin Kaepernick—who once wore socks depicting cops as “pigs” and defended Fidel Castro—took a knee was this: “I am not going to stand up to show pride in a flag for a country that oppresses black people and people of color.”

Kneeling may have evolved into a more solemn act, but Kaepernick’s protest was not conceived as an act of respect. Nor do cable news hosts have the moral authority to define it.

Kneeling is a tacit admission to a number of contentions that I simply don’t believe: I don’t believe that the United States, a nation conceived and run by flawed human beings, is inherently racist. I don’t believe there is institutional racism in America anymore or that the police, as a matter of policy, are hunting down black men.

Murder like that of George Floyd is a rare event. Chauvin was charged with murder, as were his accessories. There is not a single politician in the country who excused what happened.

But the definition of racism is always expanding. Now anyone who disagrees with the political aspirations of Black Lives Matter and its supporters—champions of a hodgepodge of leftist causes—can be accused of being a bigot.

Well, most Americans want to find ways to improve everyone’s lot, even if they have different ideas about how to accomplish it. Perhaps those of us who don’t kneel are mistaken in that belief, and perhaps more facts and arguments will change our minds. Smearing us as racists for refusing to engage in mass acts of performative contrition will not.