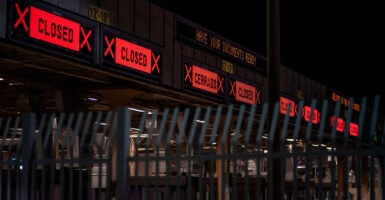 In efforts to control the outbreak of COVID-19, the United States-Mexico border was closed to nonessential traffic at midnight on March 21, 2020, in El Paso, Texas. (Photo: Paul Ratje/Agence France-Presse/ AFP/Getty Images)

Individuals crossing the U.S.-Mexico border will be subject to secondary inspections after a survey of people crossing the border found 60% of trips were nonessential, a local NBC affiliate reported.

The survey was reportedly given to 100,000 U.S. citizens and permanent residents, and found that over 60% of the trips made were considered nonessential, NBC San Diego reported.

To reduce the risk of spreading the novel coronavirus, Customs and Border Protection implemented new measures to restrict nonessential travel across the borders, according to the outlet.

“In response to the health crisis and to protect communities by the border, CBP is taking measures to discourage non-essential border crossing to and from Mexico,” CBP said in a statement, NBC San Diego reported. “It is our duty to do everything we can to protect our nation, including educating citizens and even discouraging non-essential travel to Mexico.”

Nonessential travel was restricted between U.S. entry ports in Mexico to help slow the spread of the coronavirus in the U.S., NBC San Diego reported.

The U.S. made official agreements with Canada and Mexico to limit nonessential travel across the borders on March 3, though essential commercial activity wouldn’t be impacted, according to the Department of Homeland Security.

Individuals who CBP suspects of traveling for nonessential purposes will be subject to a secondary inspection where CBP officials will distribute coronavirus educational materials from the Centers for Disease Control and Prevention to raise awareness, NBC San Diego reported. Travelers who require a secondary inspection will reportedly face extended wait times.

“U.S. citizens, lawful permanent residents are legally entitled to enter the U.S. and will not be refused entry, however, it is highly recommended that they do so for only essential purposes, consistent with the series of DHS notices published Federal Register,” CBP said in a statement, NBC San Diego reported.

The measures were implemented on Aug. 21, due to an increase in coronavirus cases along the border in Mexico, NBC San Diego reported.