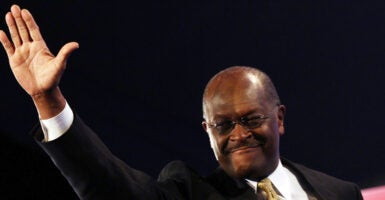 Herman Cain greets the crowd after being introduced before a presidential debate on national security issues held Nov. 22, 2011, at DAR Constitution Hall and co-hosted by CNN, The Heritage Foundation, and the American Enterprise Institute. (Photo by Win McNamee/Getty Images)

Herman Cain, who rose from working-class beginnings in Georgia to become an admired pizza magnate, popular political commentator, and leading Republican presidential contender, has died of COVID-19, his website announced Thursday. He was 74.

Along the way to national prominence, Cain was a Navy specialist in ballistic missiles, ran some 400 Burger Kings around Philadelphia, and hosted a radio talk show.

Dan Calabrese, editor of HermanCain.com and a friend and associate of 15 years, released word of Cain’s death.

“There were hopeful indicators, including a mere five days ago when doctors told us they thought he would eventually recover, although it wouldn’t be quick,” Calabrese wrote of the coronavirus that felled Cain.

“Although he was basically pretty healthy in recent years, he was still in a high-risk group because of his history with cancer.”

Cain became one of the most prominent business or political figures to die of the coronavirus.

The future presidential candidate first came to the GOP’s attention in 1994, when he calmly and respectfully challenged President Bill Clinton’s proposed restructuring of health care in a nationally televised town hall.

At the time, Cain was the successful CEO of Nebraska-based Godfather’s Pizza, a subsidiary of the Pillsbury Co. He later headed the National Restaurant Association in Washington, D.C.

On a day when the nation was watching elaborate memorial tributes to the civil rights leadership of a fellow Georgian, Rep. John Lewis, news Thursday of Cain’s death from the coronavirus spurred some political opponents to deride the entrepreneur for his loyalty to President Donald Trump rather than appreciate his dogged efforts to create promising jobs for fellow blacks and other minorities.

In particular, ungracious critics mocked Cain for publicly doubting that COVID-19 was a serious public health threat and for dismissing the wisdom of wearing a protective mask in attending Trump’s much-criticized June 20 rally in Tulsa, Oklahoma.

In a tweet Thursday, Trump praised Cain as a business leader and friend.

Cain, who had just launched a new talk show on Newsmax, was among black leaders mocked on “Saturday Night Live” for meeting with Trump at the White House early this year.

During his ascension in business and politics, Cain befriended two leading congressmen and fellow conservatives from Georgia, Newt Gingrich and Jack Kemp.

An early tea party favorite, Cain became a front-runner in the primaries for the 2012 presidential nomination while pitching his catchy 9-9-9 tax reform plan. He drew fierce blowback from liberals and the news media when, during an appearance at The Heritage Foundation and later on CBS News’ “Meet the Press,” he referred to Planned Parenthood, the nation’s largest abortion provider, as “planned genocide” of blacks.

He dropped out of the race in December 2011 amid allegations of sexual harassment while he headed the National Restaurant Association. Cain denied the allegations, telling Fox News that October: “I have never sexually harassed anyone.”

In some ways, Cain foreshadowed Trump’s own emergence as a serious presidential contender with a business background.

In a 2014 interview with The Daily Signal’s Rob Bluey, Cain criticized Congress for not getting serious about tax reform, especially simplification. He personally favored “replacing the entire tax code,” he said.

“People in Congress think that if it’s too big to do, they don’t even try,”  Cain said in the interview. “That is the complete opposite of the way the American people think. Somebody’s got to step up and do the tough jobs and heavy lifting.”

Supporters noted that Cain, in addition to his business success, had been deputy chairman and chairman of the Federal Reserve Bank of Kansas City.

Years ago, he beat liver cancer and stage 4 colon cancer, which along with his age may have increased his vulnerability to the virus.

Here are some of the tweets that reflect his admirers’ tributes amid crude comments on his death from some on the left.