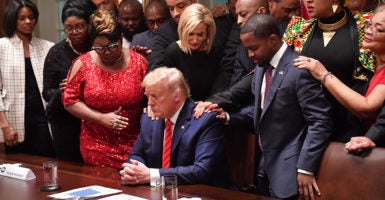 “Look at these White House Negroes,” Redd said. “Who are you all praying to? The ghost of blackface past?”

Redd also said that “Trump has got his eyes open during a prayer like he’s trying to remember which pocket he put his wallet in,” and added: “He’s sitting there looking like the basketball from ‘Space Jam,’ just sucking all the blackness out of them. Does this look like black history to you?”

Little responded to Redd’s comments in a statement provided to The Daily Caller News Foundation.

“Chris Redd and ‘Saturday Night Live’ don’t get to determine who is black,” Little said. “There’s nothing funny about a racist commentary disguised as humor.”

“Pastors like me stand in front of millions of black Americans every Sunday,” Little added. “We work with families who share the same concerns as any other American: what schools our children attend and how much we pay for our gas and groceries.”

“We stand for Christ over color,” he said. “We stand against bigoted liberals who believe it’s wrong for others to pray for the president of the United States. They will not dictate who is deserving of prayer. God has already defined that.”

Little emphasized that black conservatives will not be bullied by “liberal elites.”

“President Trump’s policies are changing the lives of black Americans in historic ways,” he said. “Progressive policies have failed the black community, so liberal elites’ only response is unfiltered racism.”

“SNL” has not responded to a request for comment from The Daily Caller News Foundation.