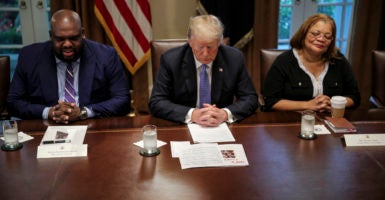 President Donald Trump prays Wednesday during a meeting in the Cabinet Room of the White House with 11 pastors from across the country. Also pictured: Alveda King, niece of Martin Luther King Jr., right, and the Rev. John Gray, a South Carolina pastor who led the prayer. (Photo: Oliver Contreras/Picture Alliance /Consolidated /Newscom)

President Donald Trump touted the booming economy and efforts at prison reform Wednesday as he met with inner-city pastors at the White House.

“We have increased and created 3.7 million jobs since Election Day. African-American and Hispanic unemployment rates have reached the lowest levels in recorded history,” Trump said during the meeting with 11 pastors.

One pastor present called Trump “the most pro-black president” of their lifetimes.

The pastors said mostly supportive things about the president during the portion of the meeting open to the press pool.

The Rev. John Gray, senior pastor at Relentless Church in Greenville, South Carolina, led the meeting with a prayer.

The Rev. Phillip Goudeaux, of Calvary Christian Center in Sacramento, asked Trump not to “give up on California,” prompting laughter.

The Rev. Darrell Scott, a Cleveland pastor and co-founder of the president’s National Diversity Coalition, said Trump is “the most pro-black president that we’ve had in our lifetime.”

“This president actually wants to prove something to our community, our faith-based community and our ethnic community,” Scott said.

Alveda King of Atlanta, niece of slain civil rights leader Martin Luther King Jr., himself a Baptist pastor, also was among the pastors gathered with the president in the Cabinet Room.

Trump said it was Kushner’s “No. 1 priority.” He talked about the First Step Act, a bipartisan bill focused on job training skills for inmates that is sponsored by Reps. Doug Collins, R-Ga., and Hakeem Jeffries, D-N.Y.

“We have passed the First Step Act through the House and we are working to pass that into law, and I think we’ll be able to do it,” Trump said of the bill, which awaits Senate action. “When we say hire American, we mean all Americans.”

Kushner talked about bringing both sides together on criminal justice reform.

“When you asked me to lead your efforts to try to reform our country’s prisons and to see if we could do it from the federal government, we were running into a little problem of politics in Congress,” Kushner said to the president, then spoke to the pastors:

So I reached out to a lot of you to see if you could help get the word out in your communities and try to let people in Washington know that making progress on this issue was more important than whatever political differences people may have.

You guys came to the White House. You all mobilized your communities, and we were able to get the bill through the House. Hopefully, we have the same results in the Senate.