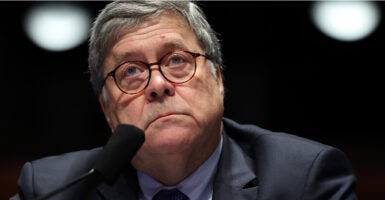 In testimony Tuesday, Attorney General William Barr justifiably pushed back hard against confrontational and rude Democrats on the House Judiciary Committee who appeared intent on scoring political points by shouting over him as he explained the Justice Department response to riots across the country.

Committee members got something else as well from the attorney general: a much-needed lecture on their role and responsibilities as elected public officials. Barr told them that “regardless of their political views” or “their feelings about the Trump administration,” they should “condemn the violence” engulfing our cities, particularly violence directed at federal officers and federal property.

“To tacitly condone destruction and anarchy is to abandon the basic rule-of-law principles that should unite us even in a politically divisive time,” Barr said, stating an obvious truth.

The attorney general was undoubtedly speaking for the overwhelming majority of the American people when he said that we should all agree “that there is no place in this country for armed mobs that seek to establish autonomous zones beyond government control, or tear down statues and monuments that law-abiding communities chose to erect, or to destroy the property and livelihoods of innocent business owners.”

Barr also pushed back forcefully against the Democratic members of the committee who have “attempted to discredit me by conjuring up a narrative that I am simply the president’s factotum who disposes of criminal cases according to his instructions.”

Barr said this false narrative stemmed from his vow ‘to do everything I could to get to the bottom of the grave abuses involved in the bogus ‘Russiagate’ scandal.”

In typical Barr style, he shredded the now-discredited yarn that Donald Trump colluded with the Russians in 2016 to steal the presidential election. Given the time and resources wasted for more than two years on what turned out to be—as Barr correctly stated—a “bogus claim,” every American who believes that government power shouldn’t be abused for partisan political purposes should want an investigation into this.

The attorney general made it clear that he applies the law “to everyone equally and that criminal cases are handled evenhandedly, based on the law and the facts, and without regard to political or personal considerations.”

Barr said Trump has told him “he expects me to exercise my independent judgment to make whatever call I think is right.” That “is precisely what I have done,” Barr said. He added that Trump has played the same role “traditionally played by presidents.”

At one point, Rep. Steve Cohen, D-Tenn., went on an undignified rant against Barr and Trump about everything from deceased sex offender Jeffrey Epstein to the Russia collusion investigation to Roger Stone, whose prison sentence was recently commuted by the president.

Barr voiced his concern over the “horrible killing of George Floyd in Minneapolis” and acknowledged that it has “understandably jarred the whole country and forced us to reflect on longstanding issues in our nation.”

But the attorney general noted that police forces “today are far more diverse,” with more “black police chiefs and more black officers in the ranks” than ever before. Floyd’s death was “shocking” but, Barr said, “such events are fortunately quite rare.”

While “every instance of excessive force in unacceptable and must be addressed,” the number of “police shootings has been decreasing,” Barr said.

The Justice Department, Barr said, is implementing a number of measures “to propel continued professionalization of the police, including setting clear standards for appropriate use of force.”

Barr noted that “the leading cause of death for young black males is homicide … and the vast majority of them—around 90%—are killed by other blacks, mainly by gunfire. Each of these lives matters.”

Barr also spoke about the radical and dangerous “defund the police” movement. He said that “demonizing the police” and defunding police departments is “grossly irresponsible,” particularly in urban communities where so many black Americans reside.

In a stark statement of how dangerous this is, Barr said:

And it is not just that crime snuffs out lives. Crime snuffs out opportunity. Children cannot thrive in playgrounds and schools dominated by gangs and drug pushers. Businesses do not locate in unsafe neighborhoods. When the police are attacked, when they are defunded, when they are driven out of urban communities, it is black lives that will suffer most from their absence.

In addition, Barr addressed the violence in Portland, Oregon, where Mayor Ted Wheeler has done little to quell the violence and has called on federal officers to leave the city.

“Every night for the past two months, a mob of hundreds of rioters has laid siege to the federal courthouse and other nearby federal property,” Barr said. “The rioters have come equipped for a fight, armed with powerful slingshots, tasers, sledgehammers, saws, knives, rifles, and explosive devices.”

Those rioters, said Barr, have tried to burn down the courthouse, attacked federal officers, and pelted them with “rocks, frozen water bottles, cans of food, and balloons filled with fecal matter.” For those who scoff at the idea of slingshots being dangerous, Barr said the rioters have been using them to fire ball bearings at officers that have “penetrated marshals to the bone.”

The injuries to federal officers trying to protect federal property include severe burns, beatings, and three officers who may be permanently blinded after being hit with lasers.

But instead of blaming the rioters for this violence, much of the media and local officials “blame the federal government,” Barr said.

As Barr very pointedly said, “peaceful protesters do not throw explosives into federal courthouses, tear down plywood with crowbars, or launch fecal matter at federal officers.”

Cohen suggested to Barr that U.S. marshals were injured because “your secret police were poorly trained.”

Rep. Jim Jordan, R-Ohio, responded to these claims by playing a video in which several Democratic members of Congress and media figures called the violent rioters “peaceful protesters.” That label was belied by the scenes of violence, destruction, and mayhem that unfolded. This video, and Barr’s testimony, were strong rejoinders to the attorney general’s critics.

Unfortunately, many Democratic committee members did not allow Barr to respond to their accusations, prompting Jordan to observe that he didn’t think they had “ever had a hearing where the witness wasn’t allowed to respond to points made, questions asked, attacks made.”

Nadler responded by saying: “What you want is irrelevant.”

Barr responded: “I thought this was a hearing, meaning you are supposed to hear from me.”

Barr promised that the Justice Department would “continue working” to “ensure the rule of law, so that people can live their lives safely and without fear.”

As members of the public (and former Justice Department lawyers), that is exactly what we expect and hope for from an attorney general, particularly when local officials are failing to enforce the law and protect the safety of the public and our communities.