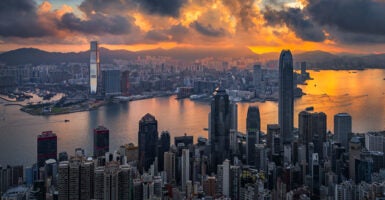 President Donald Trump announced July 14 that the U.S. would no longer recognize Hong Kong as autonomous from the People’s Republic of China.

This decision was in response to Beijing’s decision in late May to impose national security legislation on Hong Kong, and recognizes that Hong Kong’s autonomy from Beijing has been deteriorating for some time now.

This means the U.S. will treat Hong Kong with many of the same legal, immigration, customs, and other measures that it does with China.

In the process of developing the executive order outlining these new measures, it was reported that the administration rejected the idea of forcing Hong Kong to unpeg its currency’s value from the U.S. dollar at this time.

The administration was right not to try and force Hong Kong to unpeg its dollar.

Doing so would have only punished the people of Hong Kong instead of making Beijing pay for its recent draconian national security law. It would also have global impact.

Kicking Hong Kong While It’s Down

While many policymakers in the past have criticized countries like China for undervaluing their currencies, the value of Hong Kong’s dollar has stayed the same against the U.S. dollar, even as the U.S. dollar appreciates and depreciates against other currencies.

Hong Kong authorities set this peg decades ago and will buy and sell Hong Kong and U.S. dollars as a way to maintain the $7.75 to $7.85 value.

They do this for a number of reasons. The greatest reason being that, as a small hub in Asia, trade (both imports and exports) makes up over 375% of Hong Kong’s economy. Compare this to the U.S., where trade only makes up roughly 30% of U.S. gross domestic product.

A volatile currency can make the cost of doing business with a trade partner more costly for a small territory like Hong Kong. Given how reliant Hong Kong is on trade, a peg is considered an indispensable tool for maintaining economic stability.

Of course, it’s Hong Kong authorities that created this peg. One way the U.S. could possibly force Hong Kong to unpeg would be to limit Hong Kong’s (and banks within Hong Kong) use of the U.S. dollar.

Doing so would further harm Hong Kong’s economy, which has already suffered the effects of a recession for almost a year now. The recent shock to global trade since the COVID-19 pandemic began has also added to Hong Kong’s economic woes.

You might wonder: Well, if Hong Kong is no longer autonomous from China, why should its currency be treated differently than China’s?

Hong Kong authorities will continue to manage its own currency whatever happens on the bigger political issues.

Perhaps a better question might be: Well, if Hong Kong is no longer autonomous from China, why would we single out Hong Kong and its access to U.S. dollars?

Again, some might have thought this a good way to punish Beijing but the damage would mostly fall on Hong Kong.

Hong Kong’s inability to use the U.S. dollar might in fact lead it to peg to their largest trading partner, China, and its currency, the renminbi.

This could make it so Hong Kong authorities are more invested in buying and selling renminbi and make more transactions denominated in renminbi. This would be a win for Beijing, which has tried to have greater internationalization of its currency for years.

The president’s executive order on Hong Kong simply recognized a long-term trend—that Hong Kong’s governance is no longer limited to the authorities in Hong Kong. Beijing has a greater (and growing) say now.

It’s terrible that the people of Hong Kong are losing their rights and are risking imprisonment daily. But cutting Hong Kong off from the U.S. dollar would only kick Hong Kong’s economy while it’s down.

And Beijing would be OK with that.