Death Threats Against FCC Chairman Are Unprecedented and Must Stop 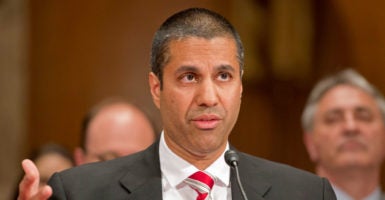 FCC Chairman Ajit Pai and his family have been harassed and received death threats amid the net neutrality debate. (Photo: Ron Sachs/CNP/AdMedia/Newscom)

But could it kill him?

Federal officials are certainly concerned, now that a flood of death threats has reached a level most insiders say they’ve never seen. This is “routine for presidents and vice presidents,” sources say, “but highly unusual for heads of government agencies like the FCC.”

For the 44-year-old chief, the risks of the job were clear from his earliest days at the FCC. He tells horrifying stories about his house being surrounded by protestors, some lurking under his windows with signs of his children’s names.

Now, the dangers to Pai and his family are so serious that the FCC head was forced to back out of a speech at one of the most important tech events of the year, the Consumer Electronics Show.

“Basically, if these threats are credible, you need armored vehicles—and I mean plural—not to mention area sweeps, aerial support, and Secret Service directly manning the commissioner at all times,” said a security expert familiar with the situation.

“There’s not the budget for staffing the Consumer Electronics Show from threats of that level,” he went on, explaining that Pai’s “detail is ill-equipped to protect against snipers, attackers, bombs, gas attacks, vehicular blockades, and other assassination attempts.”

Of course, the question on everyone’s minds is: Who cares this much about net neutrality?

Most people don’t even know what the FCC stands for, let alone who heads it. If it weren’t for Janet Jackson’s wardrobe malfunction or Bono’s fleeting expletive, half the country probably wouldn’t know the agency existed.

As for net neutrality (which is about as misnamed as “marriage equality”), the issue has never been the stuff of mainstream political passion. It didn’t even get a passing mention in the presidential debates.

So what is it about this issue that’s leading an army of the far left to threaten an innocent man’s life?

Like most things, the crusade against Pai began in the dark shadows of Obama’s favorite radicals.

“The tech left, funded largely by George Soros, decided to champion under the banner of a benign-sounding ‘net neutrality’ campaign and seize a once-in-a-lifetime opportunity to grab the moral high ground in their determination to allow the giant edge providers to censor the internet to suit their ideological preferences—ridding the internet of conservative and libertarian content,” Roger Stone explains in an eye-opening column for the Daily Caller.

Obama added the idea to his toolshed of unconstitutional crackdowns, all but demanding the FCC implement the policy in 2015.

“Why is the FCC turning its back on internet freedom? Is it because we now have evidence that the internet is not open? No. Is it because we have discovered some problem with our prior interpretation of the law? No. We are flip-flopping for one reason and one reason alone. President Obama told us to do so.”

The very opposite, he points out, of neutrality. Or, conservatives might add, the FCC’s mission.

For Pai, things only got worse. HBO host John Oliver kicked off a campaign called “Go FCC Yourself,” determined to gin up outrage (and worse) against the FCC chair. Liberals blocked the Pais’ driveway, while others savaged him on the FCC site, unloading on Pai as a “dirty, sneaky Indian.”

The rampage got so out of control that Oliver had to call on his own flock to tone down the threats. They didn’t.

The Pai doorbell rang every half hour “with pizza deliveries that they had not ordered,” Commentary Magazine’s Noah Rothman explained in his column about Pai’s tormentors. His neighborhood was plastered with fliers of Pai and his vitals, like something out of the FBI’s Most Wanted.

“Is this really the world you want Annabelle and Alexander to inherit,” read a hand-made sign affixed to a lamppost outside Pais’ residence in November, making a point to emphasize the names of Pai’s two children. “They will come to know the truth: Dad murdered democracy in cold blood,” read another.

The harassment of Pai and his family is a national outrage that should be a headline in every news outlet in America—especially considering the irony of the left’s position. These fanatics are attacking Pai on the same internet they’re complaining isn’t neutral. Only a liberal could keep a straight face.

For the rest of society, it’s just another example of the left’s ruthless and relentless intolerance. An intolerance, sadly, that too many in the media ignore—if not embrace.

As Pai said on “Washington Watch” in November, this culture of cruelty must stop.

“I cannot say in strong enough terms how much I reject this notion that people who are passionate about an issue … should go after public officials personally and their families—particularly the families. In my case, it’s been extremely unpleasant, to say the least, to have to think about these things and worry about them.

Even today, there are criminal charges filed against a man who called up Congressman [John] Katko in upstate New York and said, ‘If you don’t vote for net neutrality, I will kill you and your family…’ There’s no place in civilized society for that.”

Disagreements used to be an opportunity for debate. Now, we don’t even pretend to look for consensus.

In this post-civil world, some Americans have simply lost the desire for common courtesy—and excusing the bad behavior of an enlightened few as “justice” or “reasonable resistance” doesn’t help.

In the last decade, conservatives have paid the price for their convictions with their careers, businesses, life savings, and security. If anyone misses real neutrality, it’s us.