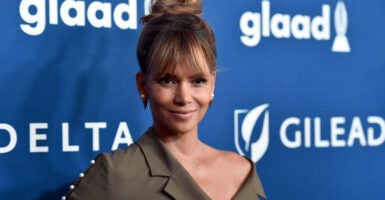 Hollywood star Halle Berry recently revealed another crack in the armor of the transgender movement, however unwittingly.

In a July 4 Instagram Live chat with hairstylist Christin Brown, the Academy Award-winning actress said she would cut her hair for her next film project—as a transgender character.

After receiving criticism on social media, simply for explaining how she would delve into the character, Berry not only apologized for her comments, but gave up the role entirely.

Transgender advocates applauded that, of course, but it’s unfortunate that Berry thought she had to surrender the role and that the transgender community pressured her to do so.

In the chat, Berry wasn’t critical or demeaning. She simply described how she would play a transgender character in an upcoming film role.

“I’m thinking of [playing] a character where the woman is a trans character, so her hair is going to have to be [short]. She’s a woman that transitioned into a man,” Berry said in the Instagram chat, adding:

She’s a character in a project I love that I might be doing. It’s really important to me to tell stories. And that’s a woman. That’s a female story. She transitions to a man, but I want to understand the why, the how of that.

Despite the fact that these are legitimate questions for anyone to ask, particularly for an actor or actress preparing for such a role, the Los Angeles Times said Berry had “repeatedly misgendered the character during the interview.”

According to the Times, Berry immediately received a wave of criticism on social media for her comments, and subsequently posted an explanation and an apology on Twitter, as well as an announcement that she would turn down the role.

“As a cisgender woman, I now understand that I should not have considered this role, and that the transgender community should undeniably have the opportunity to tell their own stories,” Berry tweeted.

The LGBTQ advocacy group GLAAD praised Berry’s decision, tweeting: “We are pleased that [Berry] listened to the concerns of transgender people and learned from them. Other powerful people should do the same. A good place to start is by watching to learn about trans representation in media.”

GLAAD suggested Berry watch the recent documentary “Disclosure,” which is about transgender characters and actors in Hollywood.

This isn’t the first time a so-called “cisgender” actor has considered a role as a gay, lesbian, or transgender character. There’s feigned outrage now, however, because although the transgender movement is minuscule, it’s disproportionately powerful and very vocal.

It’s also backed by an array of allies in progressive organizations with the power to bully even the most influential people to change whatever ideas they had about transgender people that don’t match what’s now “acceptable” and politically correct.

There are at least three reasons the Berry story is newsworthy as it relates to the ongoing campaign of the transgender movement to become mainstream and accepted in society.

For starters, it seems hypocritical for the transgender movement to claim that gender is “fluid” and that sex is not binary, yet it applauds an actress’ decision not to play a transgender character in a film because she isn’t actually transgender.

When political correctness mixes with transgender ideology, though, logic is defenestrated.

Second, the LGBTQ lobby—spearheaded by organizations such as the ACLU, GLAAD, and the National Center for Transgender Equality—espouse equality and inclusivity, and argue that acceptance for all is a core value and a goal. Yet, pushing a talented actress out of a challenging role simply because she isn’t transgender in real life seems like the least inclusive thing they could do.

Hypocrisy is rank among powerful, progressive organizations, but they are often blind to it.

Finally, aren’t actors and actresses simply playing a role? In other words, isn’t pretending to be a character, while not actually being that character, the entire point of theater, film, and television?

Just as an aside, you don’t see anyone seeking to “cancel” the theatrical play “Hamilton” because Alexander Hamilton was not Puerto Rican, like the composer-actor Lin-Manuel Miranda who plays him is. That’s perhaps because the stage play fits the current progressive agenda.