LGBT Activists Could Be to Blame for Falling LGBT Acceptance 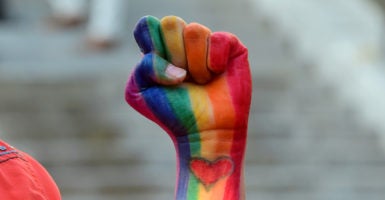 In a recent hit single, “You Need to Calm Down,” Taylor Swift mocks people who stand firm in their beliefs about sexuality, asking that they stop their bigotry and “calm down.”

The music video, which went viral, depicts conservatives as ignorant hicks who reject gays and are driven by animus. They are ugly, dated, and lack basic hygiene. By contrast, the LGBT folks in the video are bright, happy, and boast perfectly coiffed hair.

Moreover, the angry hicks are a dwindling minority, while the upbeat LGBT folks are shown to be ascendant—on the right side of history, you might say.

Despite these crass portrayals, which only confirm the left’s worst prejudices, a new survey released Monday suggests that young people are not actually falling in line with the LGBT movement as the common narrative suggests. In fact, they’re increasingly uncomfortable with it.

According to the annual Accelerating Acceptance report, conducted by The Harris Poll on behalf of LGBT advocacy group GLAAD, the number of Americans 18 to 34 who are comfortable with LGBT people in various situations slipped from 53% in 2017 down to 45% in 2018. And the 53% figure is down from 63% in 2016.

The survey asked men and women of various age brackets whether they are uncomfortable with the following:

The largest drop in “acceptance” appears to be among the youngest age bracket.

In addition, 39% said they would be uncomfortable learning their child had a school lesson on LGBT history vs. 27% two years prior.

It appears young women have dropped the most in their comfortability with LGBT people. In 2017, 64% were comfortable compared to 52% in 2018.

Also of note, in 2017, people ages 72 and up were the most uncomfortable learning a child had an LGBT lesson in school.

John Gerzema, CEO of The Harris Poll, expressed concern over these numbers to USA TODAY: “We count on the narrative that young people are more progressive and tolerant. These numbers are very alarming and signal a looming social crisis in discrimination.”

USA Today reported that when Sarah Kate Ellis, president and CEO of GLAAD, looked closer, she discovered the younger age bracket actually interacted more with LBGT people, “particularly individuals who are non-binary and don’t identify simply as lesbian or gay.”

She blamed their lower comfort level on “a newness that takes time for people to understand.”

Both Gerzema and Ellis blamed the lack of tolerance on the Trump administration’s policy efforts regarding transgender people in the military and religious liberty issues.

But this makes no sense. If politics is really downstream from culture, and there is more equality in America than ever before, wouldn’t the culture reflect and accept that notion of being more tolerant?

A better way to understand the survey results might be to look at how pushy, even aggressive, the LGBT movement has been in ensuring its rights supersede the rights of others.

Whether it’s lawsuits for “bathroom rights” or lawsuits against religious people who can’t in good conscience bake a certain cake, the LGBT community is not advocating “equal rights” but supreme rights that marginalize everyone else’s.

This aggressive push for LGBT “equality” may actually be backfiring, causing even young people to feel discomfort and alienation.

At first glance, Swift’s song might seem to align with this study, since she too is decrying society’s rejection of LGBT people. But what she ignores, just like Ellis, is that people are uncomfortable for a reason that is likely of the LGBT movement’s own making.

The LGBT movement is now defined by fighting against gender norms, demanding that children in drag become an accepted new normal, and filing lawsuits so that biological males can use women’s restrooms.

This kind of aggressive, entitled behavior is difficult to acquiesce to, especially when it infringes upon the rights of others who would rather not participate.

Instead of hoping people would become more “comfortable” around the LGBT community, it may be worthwhile for GLAAD and other groups to consider the effect their campaign is having on other people. Maybe they’re the ones that “need to calm down.”

The caption for this article has been corrected to show that young people’s acceptance of LGBT people dropped by 18 percentage points.