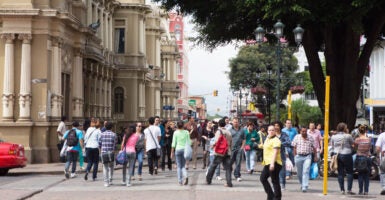 With a score of 65.8 in The Heritage Foundation’s annual Index of Economic Freedom, Costa Rica is the most economically free country in the traditional five-nation Central American bloc. It is ranked 12th among the 32 countries in the Americas region, and is the 68th freest in the world.

It came as no surprise, then, when Reuters and the Atlantic Council reported this spring that Costa Rica had been invited to become the 38th member of the Organization for Economic Cooperation and Development, an international organization that promotes policies to improve the economic and social well-being of people worldwide.

Costa Rica’s economy has been stuck in the midrange of the Index of Economic Freedom’s moderately free category since the inception of the index in 1995. Gross domestic product growth prior to the pandemic mirrored that solid but unspectacular performance over the past five years.

For the economy finally to break through this inertia and begin a sustained trajectory toward greater freedom and prosperity, the government must continue its broadly orthodox economic policies while undertaking difficult reforms.

Those reforms include liberalizing labor policies and reducing budget deficits. Both require significant political will to achieve, but are more important than ever as the nation confronts this year’s unprecedented challenges.

Traditional agricultural exports of bananas, coffee, sugar, and beef are still the backbone of its commodity-driven export economy. But Costa Rica is also Central America’s most popular ecotourism destination and an exporter of medical devices and other high-value-added goods and services.

Thanks to greater economic freedom, however, the country’s government and private sector have access to more resources with which to restart those important sectors.

The steadily increasing global demand for health care sector products has already worked in the country’s favor. According to Costa Rica’s central bank, the nation’s exports are at an all-time high.

As the world’s newest member of the Organization for Economic Cooperation and Development, the government will receive additional technical help and advice.

This guidance should enable the adoption of deeper economic reforms and propel the country’s economy to greater levels of economic freedom.

That will be good news for Central America, and even better news for the people of Costa Rica.