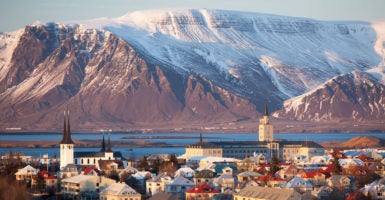 Pictured: Reykjavik, Iceland. Thanks to implementing policies that adhere to economic freedom, the island nation is poised for a robust economic recovery in the wake of COVID-19. (Photo: Travelpix Ltd/Getty Images)

Iceland, a small Nordic country, has successfully flattened the COVID-19 curve and is ready to move ahead. Life in the country seems to be almost back to normal. Curfews and social-distancing mandates have been lifted, and gyms, swimming pools, and restaurants are reopened. The country opened its airports to tourism on June 15.

There had been no official “lockdown” as there was in other countries. However, the small and open economy did take swift action that resulted in a speedy decline in new virus infections and helped to avoid a strict lockdown of the economy while containing the pandemic.

As a result, Iceland has been able to retain much of its policy space for preserving economic freedom. As noted by the latest Fitch Ratings assessment, “broad political consensus among political parties on macroeconomic and fiscal policy has underpinned the rebuilding of fiscal and external buffers over the last decade, providing Iceland with fiscal and monetary space to respond to the current shock.”

Indeed, bringing down government spending through a range of deficit-cutting efforts, the country had been able to create momentum for economic recovery, which had been bolstered by a dependable commitment to regulatory efficiency and open-market policies.

According to The Heritage Foundation’s 2020 Index of Economic Freedom, Iceland is one of the world’s 15 freest economies, with high degrees of flexibility, openness, and efficiency firmly established.

The Icelandic economy has been climbing the ranks of the “mostly free” in the index for the past decade. Prior to the current pandemic, its rising growth domestic product had been expanding at a healthy rate, recovering much of its loss from the collapse of its banking sector in 2008 that sparked a currency crisis and a substantial contraction of the economy.

The troubled banking sector has now been recapitalized. Capital controls have been lifted since 2017, and the Scandinavian island economy has returned to global bond markets and charted a remarkable post-banking crisis comeback.

Iceland’s unique achievements have not emerged from a vacuum. The small country possesses a number of particular societal features that influence its economic policies and attitudes—honesty, openness, efficiency, and trust, among many others.

The combination of those specific attributes is certainly one of the factors behind how this small Nordic free-market democracy has been successful in the past and continues to be resilient today.

For the United States, as The Heritage Foundation’s National Coronavirus Recovery Commission recommends, “empowering economic freedom and partnerships in free markets,” along with maintaining key partnerships, must be an integral element of rebooting our economic livelihoods and accelerating the global economic recovery.

Iceland is well-positioned to be just such a partner.